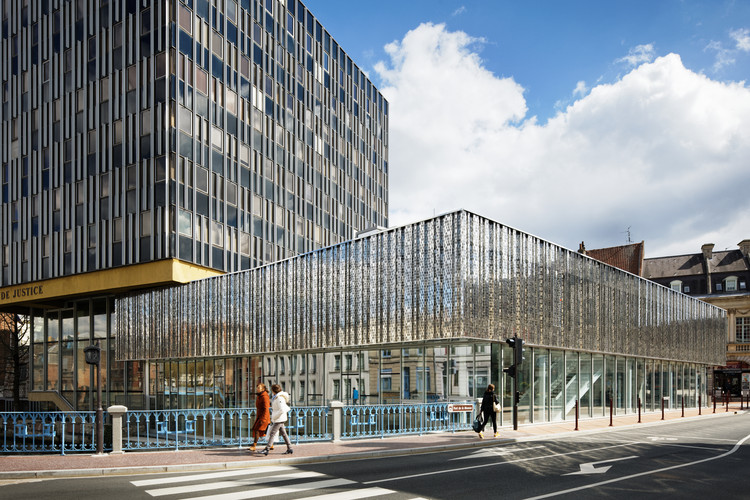 Text description provided by the architects. Architecture must have meaning. It must speak, tell stories and make us a question: a site, a program, a group of people and a story. It is a matter of specificity since architecture is the art of conjunction. Our parcel is drawn between the river and the city. The courthouse of Douai, undefined, seeks an identity. The challenge is to give sense and coherence to the project.

The strategic position of the new parcel allowed us to develop a flagship project with a well-defined character, an urban reference to the stakes of public edifices. The different stakes of the program are conditioned by the existing building. At first, we must objectively analyze and define the real architectural potential. The land that we were granted has distinguished qualities. Its topography and geographical location have led to the main lines of the project.

When a site generates a certain emotion, the relevance of the intervention becomes even more important. Practicing architecture is enhancing and enriching a departing situation. Respecting is not disappearing, it’s revealing, transcribing again and magnifying the initial emotion. The truth of the project is in the contemplation and the restitution of its environment.

It finds it’s strength and it’s richness by what it reveals. The stalks of the project are then clearly expressed: giving a new identity and finding an architectural unit and coherence, starting from the heritage of 1714 and an extension of 1978; simplicity, readability of the building and the clear functioning of its departments; highlighting the exceptional character of the Scarpe.

The declivity allows work on the notion of the ground. From the rue of Cloris, the building offers a large pierced horizontal visual that links it to the street, the hallway, the public lobby, and the Scarpe. Oriented south, the public lobby becomes a belvedere and offers a great view of the Scarpe until touching the water. The main idea is to highlight this sensation of progressive discovery and earthly anchorage of this mineral court of justice.

The section thus set up tells the main idea of ​​the project. A true horizontal break, the new building lifts and visually links the elements of the program with the surrounding environment and sculpts the void to revitalize the public space. The mineral base, a real urban anchorage on the ground of the city, comes to enclose the buildings and installs coherence between the extension and the existing one. This "active stand", which includes the existing building, allows to accompany the pedestrian and thus define a human scale.

The hall of lost steps is a direct visual extension of the public space. From this mineral thickness, the floor emerges among the two new courtrooms, fully clad in a metal "drape" consisting of perforated stainless steel folded sheets. Between the two, air, emptiness and transparency on the Scarpe and the Pollinchove Palace, former parliament of Flanders in 1714. The volume of the new courtrooms is the privileged place of judicial dramaturgy. We wanted to bathe them with light, managing to surround them with glazing on their perimeter.

Placed in order to preserve the confidentiality, the windows allow nevertheless to make present the external reality in order to prohibit the theatrical simulation or the anxiety related to the dark rooms where the litigant could feel condemned before even being judged. The floor of the Salle des pas perdus, a metaphor for a natural landscape dug by the water, reveals a wealth hidden in its base. Two worlds coexist the one above and the one below.

Two universes and two materialities, the mineral and the metallic, the smooth and the pleated, the matt and the brilliant. This duality puts in tension voids, hollows and offers great spatial quality. The staging of the river and wants to make this Palace its exceptional character by placing in its heart its natural and built heritage that represents the Scarpe and Pollinchove Palace.

Our project was finally built in response to the surrounding landscape. It is the revealer, the crossroads of the various constituent elements of the site. This staging of a rational and very precise approach of the uses in all the dimensions of the project generates a building born from the hybridization of all the urban and programmatic parameters. A point of contact and exchange... a real public building. 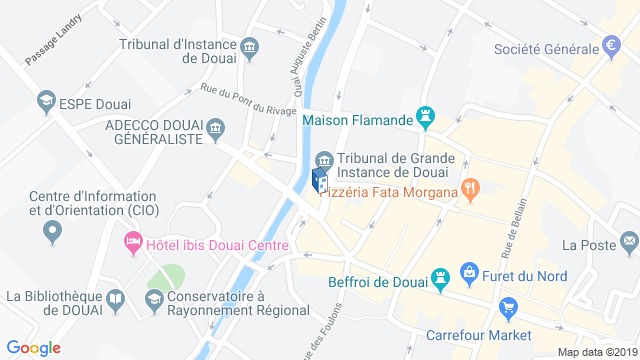 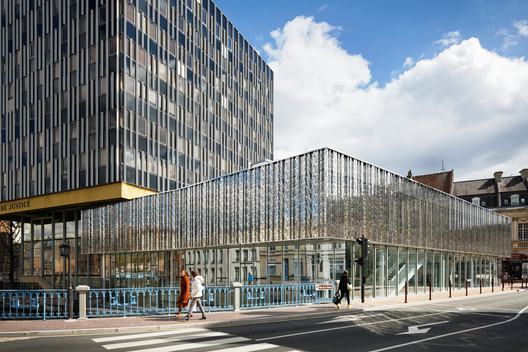