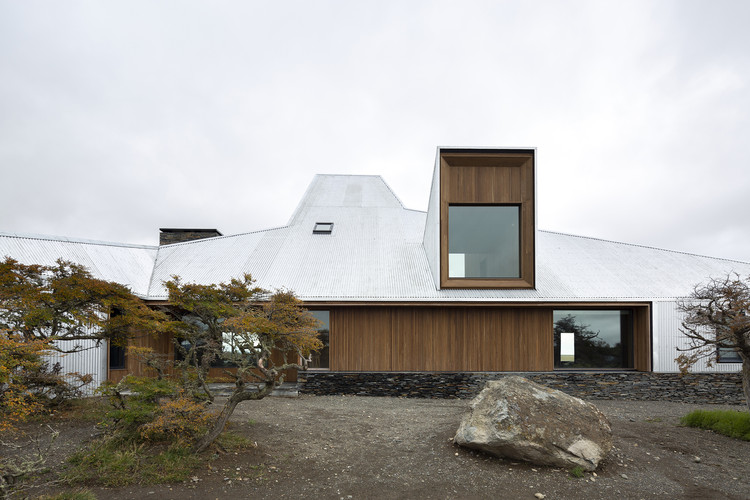 Text description provided by the architects. The Morro Chico Ranch is located within continental Argentinian Patagonia, at the southern border with Chile. Its history is mixed up with the saga of the first colonists in the region. It was founded by a Scottish immigrant who arrived from the Falkland Islands at the end of the 19th century and came into the continent — as so many others did — through the Chilean city of Punta Arenas. At the beginning of the last century, he played a major role in the famous “gran arreo”, during which 5,000 sheep were brought more than 2,000 kilometers across the wetpampato to settle the vast swathes of land that the government had granted to the colonists.

A century later, descendants of the same Scottish family are linked to an ambitious project aiming to complete and renovate the installations of the site. There were many objectives: to preserve the natural heritage, create sustainable construction, establish the best production of meat and wool, and improve the lives of those who lived and worked there. To achieve this, a master plan for the project was drawn up, with works starting in 2015 and finishing in 2019. These included new construction such as a model sheep-shearing shed (located a few kilometres from the ranch), a depot for storing the machinery and for general storage, a building for staff accommodation, and a family house. Most of the existing buildings (with the exception of those in a very poor state) were re-used to fulfill the needs of the residents and guests.

The former sheep-shearing shed and its associated buildings, which made up a distinct zone, were restored in a way that retained their original character. It is still being used and demonstrates the history of the region.

One of the notable improvements was the introduction of systems to produce clean and renewable energy. This was achieved by the introduction of solar panels and wind turbines, as well as by using a wood-burning boiler using wood from the surrounding forests. This machine is part- fuelled by bottled gas, replacing the former use of charcoal from the neighbouring resources of Río Turbio.

The layout of the complex is based on the model of a compact village, characteristic of the ranches of the region, where the utilitarian buildings and accommodation blocks are grouped together for protection against the rigours of the climate and to create places that are comfortable in the Patagonian desert.

The system of construction using prefabricated wood and metal, clad with corrugated iron, is not very different from that used by the pioneers of the region and addresses the same problems of logistics and the scarcity of local resources that existed at that time.

The building had to be carried out in accordance with the proposed energy concept. Because of this, the heated buildings, whether new or existing, were insulated. All were covered with the same corrugated sheets and looked the same as each other, which unified the exterior aspect of the whole site.

The general aesthetics of the project were inspired by the traditional architecture of the region, which demonstrated extreme austerity and almost primitive simplicity, introduced into the immensity of the Patagonian desert. The architectural language of each part of the whole developed well-defined variations on the theme of sheds with corrugated roofs, according to the function and character of the different constructions. There are simple forms like that of the sheep-shearing shed, and other, more complex forms like that of the family house.

Alongside these well-defined variations were contrasts in the materials used, between the warmth of the wood which is predominant inside (and which can be seen outside in differing amounts) and the hardness of the corrugated iron which characterises the exterior aspect.

The largest amount of wood is in the family house, and there is progressively less as the buildings become more utilitarian, until it disappears completely in the sheep-shearing shed. 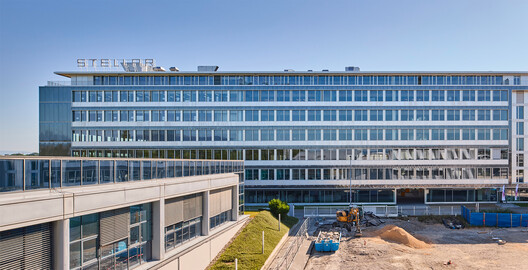 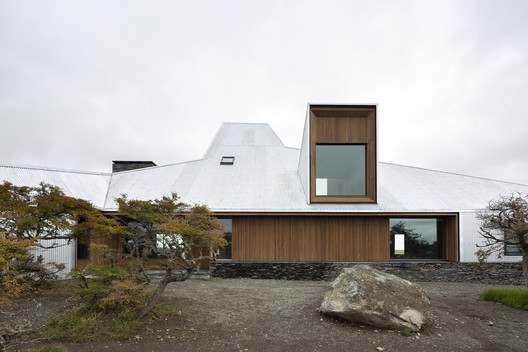