Organized by Rail Baltic Estonia, the international design competition for the terminal station in Ülemiste has been announced in May 2019. Rail Baltic is an 870 km electrified railway from Tallinn in Estonia to the Lithuanian-Polish border. The contest revolved around imagining the hub in Ülemiste, a multi-modal platform that serves both the network and the local community.

Imagined as a connecting public bridge, used by a diverse type of commuters, from locals to national and international rail passengers, as well as air travelers using the adjacent Tallinn airport, the Ülemiste terminal is a modular structural system built in phases. In fact, this phasing logic allows ongoing operations on the rail lines throughout construction.

I have been constantly informed about the developments in the Ülemiste area and in light of the works presented to the public today, I am more than convinced that the area is becoming one of the most attractive and, in terms of infrastructure, synergistic in Tallinn. A true multi-modal transport hub is emerging, with rail, bus and air traffic coming together there in the future. --Taavi Aas, Estonia’s Minister of Economic Affairs and Infrastructure.

The project’s design and experience were determined by the different circulation routes that pass through the building. In fact, these constraints are at the core of the architectural concept in order to enhance the parallelism of transportation systems and “aid navigation and the smooth integration of bus, tram and rail lines that intersect at the terminus”. The station has been designed and planned to BREEAM benchmarks and guidelines. 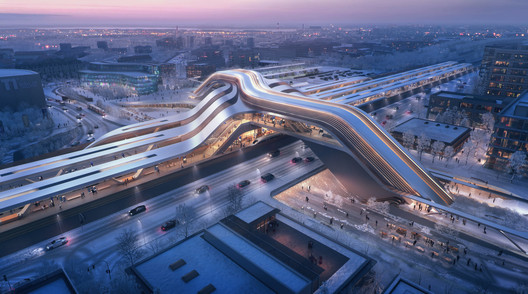