Artist Anish Kapoor will have his first permanent public work opening as part of 56 Leonard St. in New York. Located at the base of the residential tower by architects Herzog & de Meuron, the specially commissioned artwork is integrated into the architecture of the iconic New York tower. Marking the collaboration between artist and architect, the work aims to become a new cultural landmark in Tribeca.

56 Leonard St. by Herzog & de Meuron and Hill West Architects, was designed as a stack of individual houses, where each house is unique and identifiable within the overall stack. The tower is made with shifting and varying floor-slabs to create corners, cantilevers and balconies. At the base of the tower, the stack reacts to the scale and specific local conditions on the street, while the top staggers and undulates to merge with the sky. In-between, the staggering and variation in the middle-levels is more controlled and subtle.

As developer Alexico Group has said, Kapoor’s mirror sculpture at the base of the 60-story structure will seemingly both prop up the building and be squashed by it.  As a balloon-like form weighing 40 tons and measuring 48 feet long by 19 feet high, the work will define the corner of the building at Church Street and Leonard Street. Kapoor is known for the iconic sculpture Cloud Gate in Chicago’s Millennium Park, which was unveiled in 2006.

“We are excited to be starting the installation of this work that completes our vision for 56 Leonard in Tribeca and will draw arts and culture lovers to its magical seamless surface,” said Izak Senbahar, president of Alexico Group. “Anish Kapoor’s talent is matched by the imagination of Herzog & de Meuron and watching them work together on this design has been an incredible experience. We are looking forward to sharing their work with the public soon.” 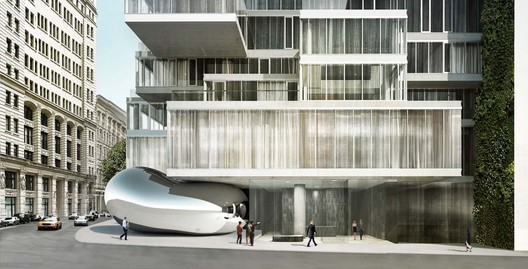