Bauhaus, among many other design movements and disciplines, has had great influence on contemporary architecture. Many claim that the school is in fact a pillar in modern-day architecture and design with its rationality, simplicity, and efficiency. However, behind Bauhaus’ smooth surfaces, a life of violence, occultism, sexuality, and pharmacology was taking place.

In a recent article on Metropolis Magazine, Princeton University School of Architecture professor and architectural historian Beatriz Colomina explains how Bauhaus was a “cauldron of perversions”, suppressing transgressive ideas and pedagogies.

Le Corbusier, perhaps modernism’s most influential architect with a seemingly rational mindset, was in fact obsessed with nudism, body building, animals, and diseases. On the other hand, notable projects by “less-known” architect Carlo Mollino, were mostly based on these perversions to the extent that historians did not know if they should place him on the list of modernism’s most influential architects. This examination raised the question of whether these “perversions” are the twists of architecture, or its very own creative engine.

The secret of Bauhaus’ success lies in the density and variety of transgression it has behind the scenes. According to the architectural historian, the school was “like a laboratory for inventing and intensifying perversions as a kind of pedagogical strategy” (note: Colomina reclaims the term “perversion” from its pejorative use to a positive one, in the same way that the label “queer” was reclaimed in the 1980s by gay activists). The school’s transgression can be seen through: purging, gender ambiguity, haircuts, leather, eroticism, sexual affairs between students and teachers, and sweatshop.

Purging: For his preparatory course at the Bauhaus, Johannes Itten introduced a regime of “purging”, based on the principles of Mazdaznan religion. The idea behind “purging” was to rid the body of “gross matter” through fasting for three weeks, eating a diet of garlic-based mush, and using machines for pricking the skin.

Gender Ambiguity: Gender inversion at Bauhaus was a norm; women dressed as men and the later wore lipsticks and tights. Marcel Breuer sent Walter Gropius a birthday card that included a double image of himself as a woman with the words: “My dear Walter, keep our sweet secret. Eternally and truly yours.”

Sexual Affairs: Lotte Beese had an affair with Hannes Meyer while the later was married with children, after being the first female Bauhaus student allowed in the architecture workshop. Walter Gropius, who was married and had a mistress as well, had a sexual relationship with a war-widowed student.

Sweatshop: All women were forcefully sent to the weaving workshop after a preliminary course. However, since weaving made the greatest profits for the Bauhaus, it was more of a sweatshop rather than a workshop. While the school was transgressive, it disregarded gender politics, diminishing women diminished within it.

To find out more about how Beatriz Colomina sees Bauhaus as a cult of perversions, read the full article titled Far from Being a Temple to Rationality, the Bauhaus Was a “Cauldron of Perversions” on Metropolis Magazine. 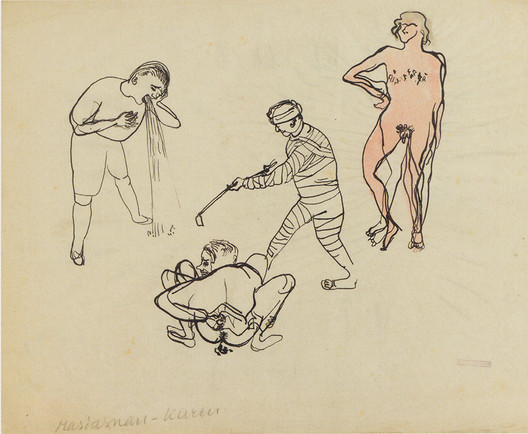