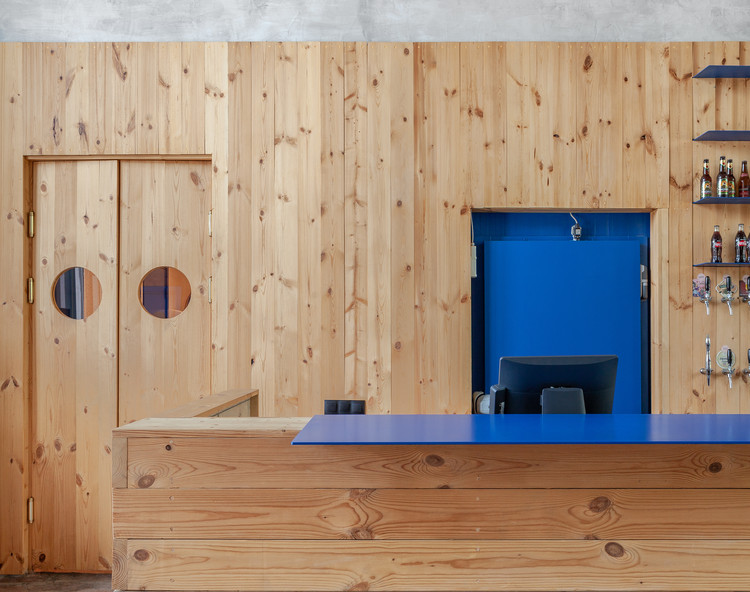 Text description provided by the architects. Located near Moscow’s VTB arena, a brand new multi-purpose stadium, home to Moscow’s major football club, Dynamo Moscow, it’s only natural, as its name attests, that the recently opened Fan Food pizzeria caters to football fans looking for a quick bite before or after a match. But far from espousing a “sports bar” aesthetic of faux-leather upholstery, sports memorabilia, and wall-to-wall TV screens, the venue is a paradigm of cool sophistication and conceptual playfulness.

Designed by Vladislav Gaiduk and Vasily Korotkov of Moscow-based architecture studio Mast, the pizzeria’s interiors combine a brutalist aesthetic that draws from the Soviet avant-garde’s Constructivist playbook with subtle touches of Italian vernacular – a nod to the country where both pizza and football are concepts to live by.

Due to its clientele, which apart from football fans also include music fans attending the arena’s frequent concerts and lots of local office workers on their lunch breaks, the self-service pizzeria was designed to meet a high table turnover. L-shaped in floorplan, the venue is divided into a serving area – featuring a bar counter on one side, and an open kitchen, complete with a wood-fired oven, on the other – and a dining area along the street-facing façade whose floor-to-ceiling windows makes for a light-filled space where patrons can enjoy views of the adjacent Petrovsky Park.

Exposed concrete surfaces and volumes dominate the unadorned interiors, imbuing the space with a brutalist sensibility of Soviet nostalgia, while the irregularly shaped stone paving and the open kitchen’s ceramic tiling introduce vernacular elements with Italian origins without diluting the pared-down aesthetic of the interior design.

The pared-down palette of materials, which also include unvarnished wooden planks lining the bar counter – whimsically reflecting the pattern of the boar-formed concrete kitchen counter – reflects a tight budget but it’s also an aesthetic choice. “We have minimized the amount of finishing materials so that the space will be perceived as a whole”, Vladislav says.

Having to deal with a seven-meter high space, the architects introduced a series of slim arches along the dining area that humanize the scale of the room, as well as conceal the service ducts that run above them and delineate the table seating. The rhythmic progression of the arches enlivens the space without the need for ornamentation while their ceremonial pomp finds a fitting climax in the ceramic tile mural on the end wall.

Depicting Lev Yashin, the USSR’s most legendary goalkeeper, the mural was created in the style of Soviet artist Alexander Deineka further enhancing the nostalgic bona fides of the interior design. Although Yashin’s figure is the only direct football reference, the architects have cleverly incorporated other football-alluding elements, most notably Dynamo football club’s emblematic blue color, which the restaurant’s doors, shelves, and ventilation pipes all boldly sport. It’s a subtle design feature that nonetheless makes for a spirited statement, not unlike the new pizzeria itself. 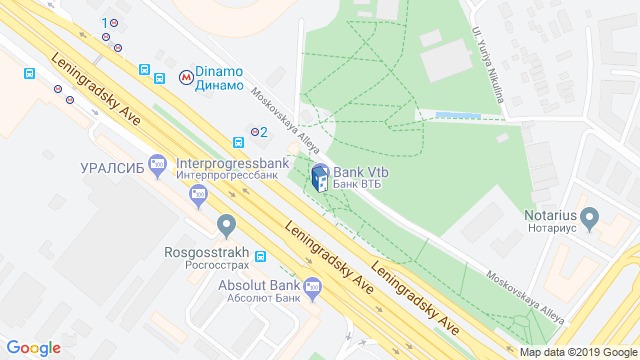 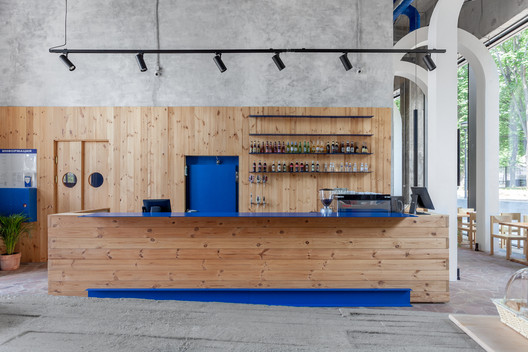