SOM (Skidmore, Owings & Merrill LLP), in partnership with Consultatio Real Estate, presented their project for Buenos Aires titled “Catalinas Rio”, an office building on the banks of the La Plata River that is designed to double as a center of activity and expansion for the Catalinas Norte business district. With a plethora of public green spaces and two trapezoidal buildings linked by walkways and green terraces, the project aims to create a new and vibrant identity for the district and the city as a whole. Construction is due to be completed in 2022.

The city's Finance District is experiencing an unprecedented period of expansion (…) The plots of land acquired by Consultatio allow for new forms of community living and urban connection and it's in this spirit that the Catalinas Rio project was born. The project is a strategic one, aiming to create a crucial point of contact and connection, combining common areas to commercial activities, green spaces, and cultural, touristic, governmental, and historical sites. This project is a new icon that will change the landscape of Buenos Aires. - Eduardo F. Costantini, Presidente de Consultatio Real Estate.

Catalinas Rio will occupy a significant part of the city's newest sector called “Catalinas Norte II.” The project is a part of a master plan to expand the city's business district by transforming unused land abandoned by the old railroad companies that once operated along the banks of the Plata River. By building onto these old railroad sites, the project expands the city's coastal edge and creates a new urban destination, ultimately improving the public space. The project will occupy the largest piece of land in Catalinas Norte II – taking up 3 of the 6 plots allotted to the expansion of the district, all located along the city's riverbank.

The result is an unorthodox set up that looks to set a precedent in the design of office buildings in Buenos Aires, with the creation of a new urban identity whose primary focus is the well-being of its inhabitants and open space. - Gary Haney, socio de diseño de SOM.

A new urban identity will begin to take shape in public spaces being built in Catalinas Rio: an urban, open-air plaza that harks back to the open spaces that marked historic Buenos Aires, will serve as the cornerstone of the project. The plaza will connect to the street, the maritime walkway, and the various segments of the building. The space will be located between the two towers' lobby areas, alongside a variety of shops designed to create an atmosphere for a wide range of activities. With the old railway and bus stations of Retiro and various public parks within walking distance, the plaza will facilitate connectivity to public transportation and nearby services. SOM's vision for the project also includes a proposal for a pedestrian walkway that will extend over the railway lines and the De la Plata River, connecting the building with a public walkway, a ferry terminal, and the Puerto Madero neighborhood, a zone revitalized for mixed-use living.

The building is designed as a vertical campus, a unique structure that connects the vitality of the urban plaza to the office spaces above.         -Kim Van Holsbeke, director de SOM.

The two towers, one with 29 floors and the other with 22, are connected by multi-leveled trapezoidal bridges that are important factors in the collective well-being of the building and its occupants. Together, the towers and the bridges connecting them form an "urban window" framed by the office spaces around them. Large surfaces of greenscape adorn the bridges, complementing the balconies that offer unobstructed views of the river and the city-scape. The terrace is strategically placed to make it functional year-round in all weather conditions. With extensive covering that allows occupants to enjoy sunlight on cloudless days and balconies that offer shade and protection from the elements, the terraces offer 10,000m2 of outdoor space.

In the interior of the buildings, the elements of sustainability and communal well-being converge to create an optimal working space. The buildings' high-performance glass fixtures offer solar protection to prevent over-heating. The vertical flaps and horizontal screens change position throughout to allow natural light to enter the building. An improved air filtration system and network of water fountains complement the natural lighting system, making for a healthy and comfortable working environment. To top it off, the building is certified LEED® Gold. 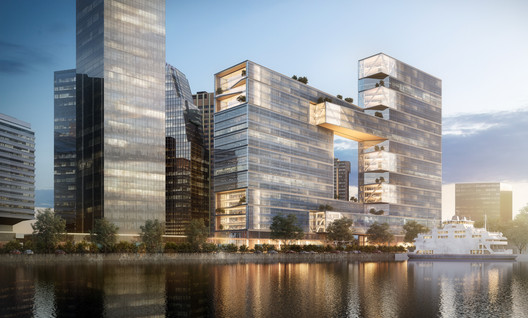