Led by Iyad Alsaka, Reinier de Graaf, Jad Semaan, and Adrianne Fisher, OMA’s proposal was selected as the winning entry for a residential project on Kuwait City’s waterfront. In collaboration with local partner Kuwait-based consultant Pace, The Wafra tower will be OMA's first venture in the country upon its completion. 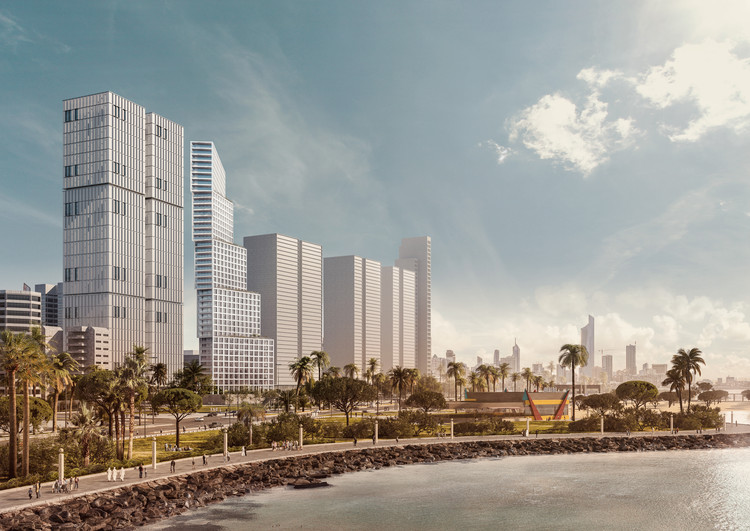 Located in the Hessa Al Mubarak District along Kuwait City’s waterfront, a district under construction, the tower puts in place five residential blocks creating a stepped configuration that “maximizes occupancy on the lower floors and optimizes views along the vertical axis of the building”. The design that shifts from the regular L shaped block, offers its tenants views on the waterfront and the city. In fact, all different apartment typologies and penthouses, propose frameless panoramas across the gulf.

In a bold move, the circulation core is exposed, acting as the backbone of the whole structure, and the pivot that rotates the blocks. The unconventional design generates through its stepped shape, terraces that create recreational areas, swimming pools, and diwaniyas. On another level, the façade accentuates the twisted aspect of the tower, through a rectangular grid that highlights the movement of the blocks. A platform on the ground lobby holds lounge areas and co-working spaces.

Iyad Alsaka partner in OMA since 2011, is in charge of the practice’s work in the Middle East and Africa, leading projects like the master plan for the Waterfront City in Dubai, the HAI Airport City masterplan in Doha, to name a few. He is also leading the works on the Wafra tower with Reinier De Graaf.

The OMA proposal was selected from three design entries in a competition organized by the Wafra Real Estate Company. Construction of the residential tower is expected to start at the end of 2020.