Save
What is the Future of Concrete in Architecture?

Concrete has been a material of choice for architects and builders for thousands of years, with the earliest known use dating from Syria and Jordan in 6000BC. Its low cost, versatility, fast application, and sheer familiarity to those involved in using it means that roughly 22 billion tons of concrete are poured every year. According to a recent BBC study, production of cement has increased thirtyfold since 1950, and a further fourfold since 1990, driven in part by postwar building in Europe, and building booms across Asia from the 1990s onwards. It is predicted that to keep pace with demands in South East Asia and sub-Saharan Africa, cement production may have to increase by 25% by 2030.

With renewed scrutiny of the contribution of the built environment to climate change, concrete has sustained particular pressure. According to Lucy Rodgers at BBC News, “if the cement industry were a country, it would be the third-largest emitter in the world – behind China and the US. It contributes more CO2 than aviation fuel (2.5%), and is not far behind the global agriculture business (12%).” At the UN 2018 COP24 Climate Change Conference in Poland, it was highlighted that in order to meet the requirements of the 2015 Paris Climate Agreement, annual cement emissions must fall by 16% by 2030. Against this backdrop, architects and researchers have generated a bounty of possibilities for how concrete might evolve for a greener construction process.

Many of these innovations focus on the reduction of cement in concrete mixtures. Recently, MIT researchers revealed an experimental method of manufacturing cement while eliminating CO2 emissions. Using an electrochemical method that captures CO2 before it is released, the team proposes using the sequestered carbon in the fuel and drinks industry.

A related stem of innovation comes from integrating bio-based materials and elements into concrete mixtures. Recently, researchers at Lancaster University in the UK unveiled a novel approach of using nanoplatelets extracted from carrots and root vegetables to enhance concrete mixes. Another trend of “bioreceptive concrete”, developed by Dr. Sandra Manso-Blanco, sees structural concrete layered with materials to encourage the growth of CO2-absorbing moss and lichen.

An alternative mixture which is already entering mainstream architecture is GFRC (Glass Fiber Reinforced Concrete). The material consists of a mortar made of concrete, sand, alkali-resistant glass fiber and water. Plasticity is one of the main qualities of GFRC, enabling the molding of thinner and thus lighter façade pieces. For example, this material is used in the cladding of the Heydar Aliyev Centre by Zaha Hadid Architects, and it is also being used to implement the complex forms of Gaudi’s Church of the Sagrada Familia.

As well as embracing GFRC in the construction process, Zaha Hadid Architects has also exhibited a more novel approach to concrete, having unveiled a 3D-knitted shell at the Museo Universitario Arte Contemporaneo in Mexico City. Forming part of ZHA’s first exhibition in Latin America, KnitCandela “pays homage to the Spanish-Mexican architect and engineer Felix Candela” by reimagining his inventive concrete shell structures through an innovative KnitCrete formwork technology. With a knitting time of 36 hours, the cable-net and fabric formwork system allows for expressive, freeform concrete surfaces to be constructed without the need for molds. The knitted fabric for KnitCandela, developed at ETH Zurich, was transported from Mexico to Switzerland in two checked suitcases, totaling 350 kilometers of yarn weighing 25 kilograms. The pavilion’s thin, double-curved concrete shells hence weigh only 5 tonnes in total, despite a surface area of 50 square meters.

While playing a crucial role in the KnitCrete technology between ZHA’s exhibition, ETH Zurich has been at the forefront of a number of innovations concerning concrete. With the intention of maximizing available space and avoiding steep construction costs, researchers from ETH Zurich’s Department of Architecture have devised a concrete floor slab that with a thickness of a mere 2cm, remains load-bearing and simultaneously sustainable. As opposed to traditional concrete floors that are evidently flat, these slabs are designed to arch in order to support major loads, reminiscent of the vaulted ceilings found in Gothic cathedrals. Without the need for steel reinforcing and with less concrete, the production of CO2 is minimized and the resulting 2cm floors are 70% lighter than their typical concrete counterparts.

More recently, the institution has also showcased the potential of 3D printed concrete. The “Concrete Choreography” installation at Riom, Switzerland, presented the first robotically 3D printed concrete stage, consisting of columns fabricated without formwork. In collaboration with the Origen Festival in Riom, Switzerland, the installation features nine 2.7-meter-tall columns, individually designed with custom software and fabricated with a new robotic 3D printing process developed by ETH Zurich with the support of NCCR DFAB. The hollow concrete structures are printed to allow materials to be strategically used, allowing for a more sustainable approach to concrete architecture. In addition, the computationally-designed material ornament and surface texture exemplify the versatility and significant aesthetic potential 3D concrete printing holds when used in large scale structures.

It is clear, therefore, that there are numerous potential futures for concrete to continue as a material of choice in the design and construction industry. Having shaped our cities for centuries, and facilitating rapid expansions and new heights, it is now time to consider how materials such as concrete can continue to support innovation, by being the subject of innovation themselves. The challenge for architects will be to ensure that such innovative solutions, with the potential to fundamentally change how we do or do not use concrete, begins to become accepted in a traditionally conservative industry. Otherwise, it is clear that the environmental impact of concrete as it is currently constituted will see the material overtaken by its green competitors. 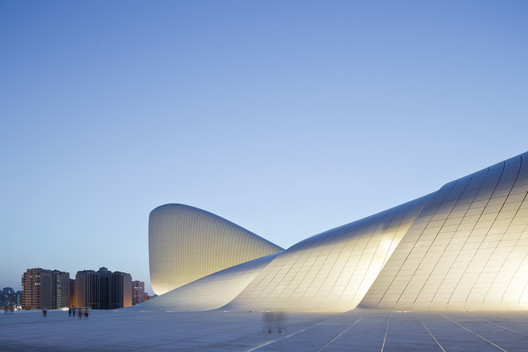