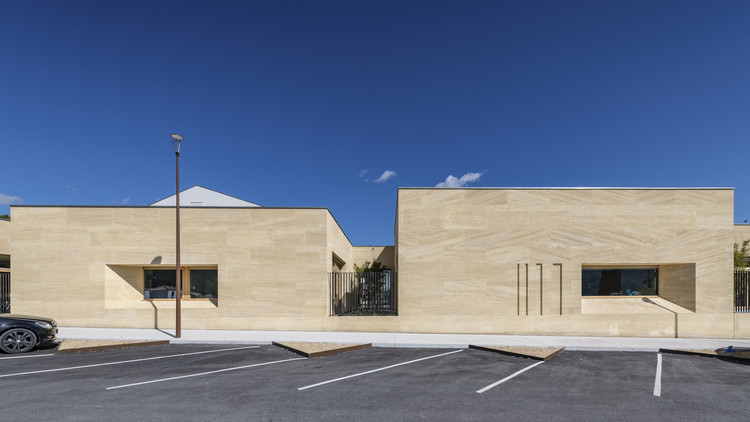 Text description provided by the architects. The site for the expansion and the renovation of the Molina school is on a privileged area. Due South, it overlooks the plains of Cuges-les-Pins, the biggest Polje in France. On this exceptional geographical site, up against the Sainte Baume on its south side, the future school offers very wide and open views on the Cuges-les-Pins fertile lands, dear to the town, on which a typical agriculture is encouraged, as well as on the forest mountains next to them. At the junction of two paths, the structure highlights the limits of urbanization.

The bordering road network and the proximity with the village enable an easy access to the site. The surrounding landscapes form an adequate setting for teaching.The submitted project establishes itself with simplicity, making the most of its location. The new school of Cuges-les-Pins is open to the south and to its landscape, while it is protected from the prevailing winds. The school fits very well to its urban surroundings, a permeable front built on the west side, on the cemetery path, and, the main entrance on the south side via a square, both perfectly conform to the topography of the area.

The use of volume on the ground floor is an alternation of solid stone structures along the cemetery path, with cultivated patios. The Mediterranean essences emanating from the patios go with the pedestrian up to the square, which brings a rural touch to this Provencal village. Three openings in the 40 cm thick solid stone facades, on the cemetery path and on the entrance, enable the light to come into the animated spaces of the school such as the hall, the multipurpose room, and the library.

These spaces open to the public spaces confirm the identity and the visibility of the building in the village and characterize the institution. On the north side, a two-storey compact tiled building forms the articulation with the existing school. Its volumes, simply rendered, conform to the nearby houses and mark the end of the fragmented urbanization south of the village. The building offers protection from the Mistral wind thanks to its front, and enables views on the village on the north and on the agricultural plains on the south, from the classrooms.

The inside of the structure is made of wide tree-filled courtyards, extending to the south with a vegetated prolongation, also used as an additional valley gutter for the control of rainwater, and as teaching spaces offering possibilities for gardens and orchards.The details of the project are carefully designed so that they fit in and work together with the neighborhood pavilion on the north and the agricultural surroundings on the south. Indeed, a second vegetated hedge on the north makes the nearby houses less visible.

This wooded space, open to the public becomes the school park where the existing children playground is moved. At the edge of the cultivated lands, the square extends eastward in a cultivated embankment on which a pedestrian walk links the Cemetery path to Victor Hugo Street. 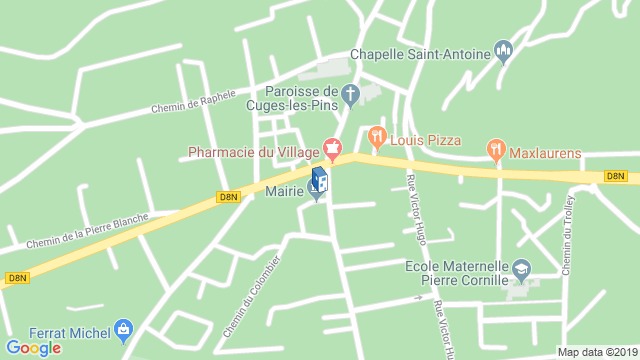