Save
Critics and Community: Reviewing the 2019 Chicago Architecture Biennial
Share
Or
Copy

The third edition of the Chicago Architecture Biennial (CAB) has opened in Chicago with a range of new exhibitions and installations across the city. Organized under the theme ...And other such stories, the biennial showcases the work of over 80 contributors, including MASS Design Group, Forensic Architecture, Theaster Gates, and more. Taking a look at the main venue, we’re diving into some of the exhibitions and emerging stories. 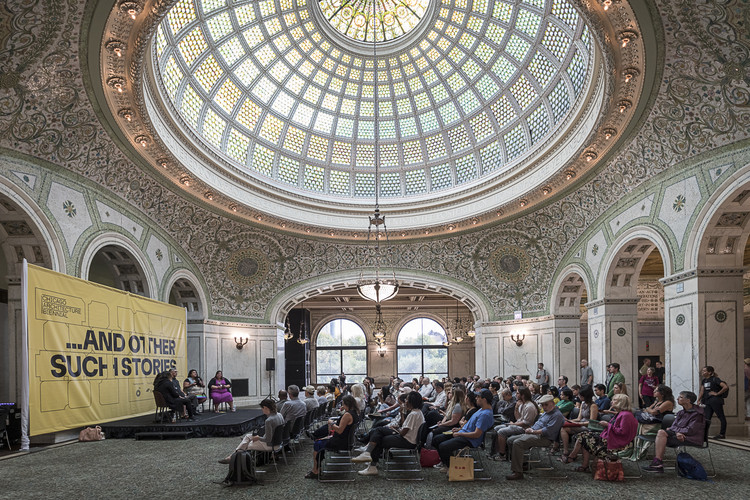 The Chicago Cultural Center serves as the main venue for the 2019 Chicago Architecture Biennial, with the main exhibition space featuring projects from 80 participants from more than 20 countries. Opened in 1897, the Chicago Cultural Center is a Chicago landmark building operated by the Chicago Department of Cultural Affairs and Special Events and is home to free cultural exhibits and programming year-round. To put the opening in context, CAB started off with an exchange between critics when Blair Kamin, architecture critic for The Chicago Tribune, wrote a controversial column that questioned the ethics behind press junkets. Through these arrangements, Kamin brought up whether the public can trust the integrity of these journalists’ work. He received push-back from a range of fellow critics and writers, from Mimi Zeiger and John Parman to Alissa Walker.

Looking beyond the opening shots, the main venue space includes a broad range of exhibitions and installations. Of special note is MASS Design Group's memorial to the victims of America’s gun violence epidemic. The team worked in partnership with the artist Hank Willis Thomas and the gun control advocacy groups Everytown for Gun Safety and Purpose Over Pain to developed The Gun Violence Memorial Project (2019) and honor the lives of gun violence victims. Through advocacy and remembrance-object-collection workshops, they invite the public to contribute stories and memories to the ongoing memorial. The objects reside in a collection of glass houses representing the magnitude of gun-related deaths that occur over a single month in the United States.

Built collaboratively by ConstructLab, a team of designer-builders based in Berlin, and Chicago-based designer-builders, How Together (2019) addresses togetherness in various ways. It includes an agora (open space for public assembly) generating possibilities for conversation and collectivity; a public wall displaying the voices of Biennial contributors and publics; newly devised tools and devices for convivial gathering; and what they call an anti-manual: a user manual on the possibilities for transforming space. How Together will host public programs and workshops throughout the Biennial.

Various housing movements are occupying vacant properties in downtown São Paulo to both pressure the city to implement social housing policies and simultaneously provide housing to low-income communities so they can gain access to urban amenities and employment available only in the city center. MSTC (Movimento Sem Teto do Centro / City Center Homeless Movement) is one of the most active such organizations. This installation, developed through a research studio in collaboration with the architecture school Escola da Cidade and the art and curatorial collective O Grupo Inteiro, presents MSTC’s strategies for housing activism

The Plot: Miracle and Mirage

The Plot: Miracle and Mirage (2019) is a research project by Alejandra Celedón, Nicolás Stutzin, and Javier Correa uncovering the history of how experiments in free- market economics engendered an urban model. In the 1970s and 1980s, a group of Chilean economists trained at the Chicago School of Economics were responsible for conceiving the wholesale privatization of social services and financial infrastructure during their country’s violent right-wing military dictatorship. They made Santiago, Chile’s capital, an “experiment in freedom”—a laboratory for new forms of financially driven urban development and housing policies now associated with the global housing crisis.

Beyond the City: The South American Hinterland in the Soils of the 21st Century

From the gradual urbanization of the Atacama Desert to the unchecked pumping of oil in the Brazilian, Ecuadorian, and Peruvian Amazon, inland South America is host to both large-scale infrastructural projects and resource extraction. South American governments commit their natural resources to foreign buyers in exchange for loans and (often poorly planned and executed) public works projects. Somatic Collaborative’s Beyond the City: The South American Hinterland in the Soils of the 21st Century (2019) demonstrates how architecture and urbanism have shaped the spaces where resource extraction takes place. It visualizes five projects in five territories involving five resources.

Dheisheh is a Palestinian refugee camp established in 1949. From 2015 to 2017, Decolonizing Architecture Art Residency convened politicians, conservation experts, activists, and local residents to discuss the implications of nominating Dheisheh—a place established with the intention of being temporary—as a World Heritage Site. Refugee Heritage (2015-2018) presents the heritage nomination application, images of Dheisheh, and documentation on the current state of the home villages of the first generation of Dheisheh refugees. It challenges definitions of heritage, asking instead how architectural instruments can be undermined, or mobilized as agents of political transformation.

Visitors should also check out Decolonizing the Chicago Cultural Center. Settler Colonial City Project, led by architects Ana María León and Andrew Herscher, proposes that settler colonialism is an ongoing reality in the Americas. Made in collaboration with Chicago’s American Indian Center, the first urban-based Native community center in the United States, Decolonizing the Chicago Cultural Center (2019) offers a “decolonized” reading of the building and the city of Chicago. Their publications, public programs, and site-specific interventions reveal hidden stories of colonial violence embedded in the building.

The Chicago Architecture Biennial is curated by Yesomi Umolu, Sepake Angiama, and Paulo Tavares. A full calendar of events will continue through January 5, 2020. 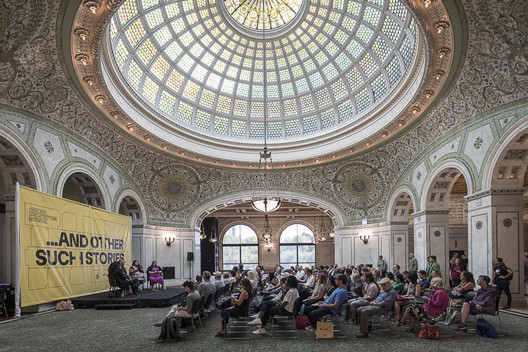