Throughout Wright's 5 decade career, his designs have focused on the abstraction of space, drawing from both natural principles and the evolution of the United States' as a nation. Through his work, Frank Lloyd Wright sought to change the way that people lived their lives and his impact remains woven into the fabric of American style and culture. His work has influenced and inspired generations of creative professionals and his designs forever changed the way that houses were built, specifically in the United States.

So numerous are Wright's works throughout the United States that Home Advisor created a map marking some of his best known projects in every region of the country. Read on to see each illustration in depth.

We created a list of the 37 states that have a residential property designed by Frank Lloyd Wright. To put it together, we gathered information about the architect's projects from a wide variety of sources. The list includes properties that have since been demolished, destroyed, damaged, renovated, and restored, as well as some that were built after Wright's death in 1959. For the final list, we selected the houses with the greatest historical and architectural importance in each state.

For more Information, check the official page of Home Advisor.

Editor's Note: This article was originally published on October 12, 2019. 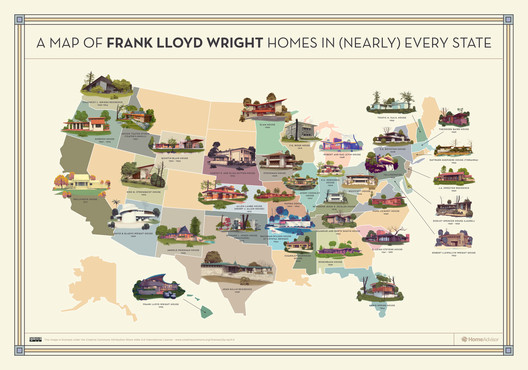