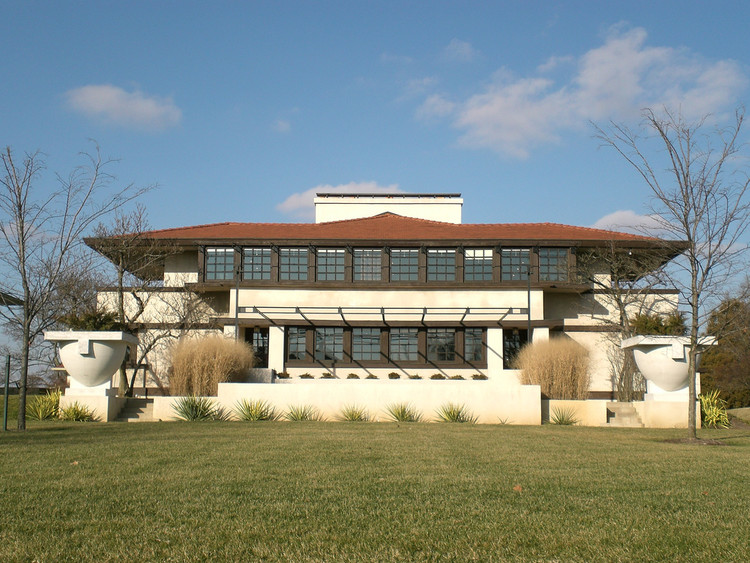 Text description provided by the architects. One of the first and only examples of the Prairie Style in Ohio, the Westcott House became a significant work in the prescribed methodology of Frank Lloyd Wright’s architecture.

Completed in 1908 for Burton J. Westcott and his family after moving the Westcott Motor Company from Richmond, Indiana, the Westcott House is an early staple in Frank Lloyd Wright’s iconic detailing and integration of a building into its landscape.

Completed shortly after Wright’s trip to Japan, the Westcott House implements similar Japanese styling’s that enhance the low-lying, horizontality of the house and its connection to the landscape.

As an early example of the Prairie Style, the Westcott House does not have the low projecting planes as some of Wright’s later works; however, it marks the beginning of the open plan, expansive windows, and Wright’s organic detailing.

In many ways, the Westcott House displays continuity on Wrights work; the low pitched roof plane that overhangs the second floor terraces, the large fireplace that protrudes through the volume of the house, and most of all the long window bays that open up the interior to the natural light.

The Westcott house stretches across the landscape where the elongated volume of the house is continued by extended patios and pergolas that connect the main house to the horse stables and the garage.

In Wright’s initial design from 1908, there were shallow pools – inspired by his trip to Japan – that complimented the horizontality of the house as well as establishing a deeper relationship between the house and the landscape.

One of the most interesting aspects of Wright’s design does not actually occur within the main house, rather Wright’s most innovative designs for the Westcott House is the garage.

At the time when the house was being designed and constructed, cars were unable to reverse, so Wright incorporated a turntable similar to those found in train yards that would turn the car around upon exiting the garage.

Unfortunately, there were extensive renovations to the interior of the house during the 1940s that took place after the passing of Burton J. Westcott, which led to the exchange of owners over the next 60 years.  After the passing Westcott, one of the owners transformed the open planned house into five apartment units. Ultimately the house fell into disrepair and anonymity among the architecture community and among Wright’s own references.

In 2000, the Frank Lloyd Wright Building Conservancy discovered Wright’s lost work in Springfield, Ohio and purchased the building to restore it to its original allure and detailing.

After 5 years and over 400 volunteers, the conservancy was finally able to restore the Westcott House back to Wright’s initial design specifications and was able to open the house to the public in October 2005.

Although, it’s rough journey through several owners led to the houses degradation for over a half century, Wright’s Westcott House embodies the early principles of the Prairie Style, while living on as a lost treasure of the master architect, Frank Lloyd Wright.