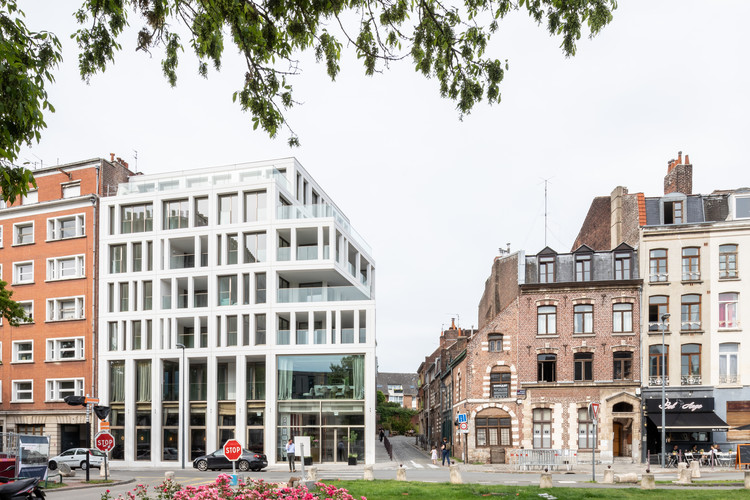 Text description provided by the architects. Facing the iconic monuments which are the 17th century Hospice-Comtesse and the Marcel Spender and Jean Willerval 1970s High Court buildings, the Peuple Belge building, with its contemporary style, is playing a part in the regeneration of the Vieux-Lille neighbourhood.

Le Peuple Belge is built on a 515 m² corner lot, integrated into the urban island and rising, over six floors, to a height of 21 metres. It offers a mix of functions - restaurants, hospitality, and accommodation.  The first floor is home to gastronomic restaurant Le Cerisier and the level below is occupied by the adjoining brasserie, La Griotte. Both of them, alongside the Les Nids guest rooms on the upper floors, are managed by Michelin-starred chef Eric Delerue, who establishes Le Cerisier en Ville as a unique location combining fine dining, design and culture. The building’s top four floors form a multi-dwelling unit with generous terraces and loggias.

The building’s different heights create a stepped profile with a variety of sight lines. Work on the volume has been informed by a desire to integrate the morphology of the surrounding built environment - traditional buildings as well as more recent structures. This has led to both a determination to adapt and to assert an architecture anchored in its context, and which structures the street corner through its volume expressed in a high-performance concrete.

Smooth, white and pared back, this cement has been used for all the structural elements. Its framework is adapted to its different functions: wide bay windows which open the restaurants onto the city; for the accommodation, the design is denser to offer intimacy to residents, and on the top floors, openings provide residents with clear views over the city.

A prototype was produced on site and various finishes were tested in the factory (smooth, semi-smooth, acid etched, etc.), before we chose this polished concrete.

This material was used for the structural elements, the beam structures, thus lightening the structure by creating large window openings. The elements pre-fabricated in Belgium were delivered every two days, due to limited space. Just in time delivery was used during construction, which was staggered over nine very precise stages. 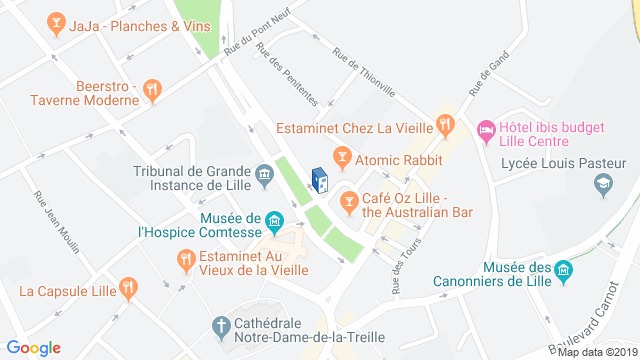