Accessibility is often approached as a field related to disability, whether physical or mental. When it comes to architectural design, it always comes up as a peripheral consideration of the project and not as something fundamental. However, there are other barriers.

In this edition of Editor's Talk, editors from ArchDaily Brazil share their thoughts on what they understand as accessibility and whether it's possible to create a neutral architecture.

Nicolas Valencia: Accessibility was August's Monthly Topic. Most of the articles focused on universal design, but ArchDaily Brazil published one about Women in Architecture as well. How do you understand accessibility?

Romullo Baratto: Accessibility is often approached as something related to disabilities, both physical and mental. However, there are other barriers — invisible ones — that makes architecture inaccessible to some professionals, creating a lack of accessibility — and equality — within our very profession.

Victor Delaqua: For me, the basic principle of accessibility is to recognize equality between people. This means exercising respect and appreciation for differences and making any point of discrimination or exclusion unacceptable. This can be discussed in many ways, from sexism to the way we conceive spaces to not restrict any aspect of people's life.

Matheus Pereira: As architects and urban planners, we are responsible for somehow trying to broaden the discussions on these themes. Architecture is a political discourse, but there are often silenced barriers that need to be broken so that we can see the other side and, above all, understand that plurality is necessary.

Brazil, a Tale of Two Countries

Nicolas Valencia: ArchDaily Brasil usually sheds a light on discrimination in architecture: sexual orientation, gender, racial issues. What does this say about the country?

Eduardo Souza: Brazil is a highly unequal country. These are themes that are increasingly emerging, along with political polarization.

Romullo Baratto: We live in a country full of contradictions. Brazil is at the same time pretty open-minded regarding some aspects of daily life but also very conservative in other aspects. Those topics are of great relevance nowadays cause those contradictions are emerging and becoming more visible to everybody, and a very significant part of those issues regard to gender, sexual orientation, race, and economic status.

Victor Delaqua: Brazil is a country that emerges from a history of very violent colonization. The miscegenation that many people look at romantically is actually the result of abuse and rape from the white man to the natives and enslaved black people. Nowadays there is a big discussion that reinterprets the story we have been told and allows us to understand the social roles and the way society is built to keep minorities and dissenting bodies out of places of power and decision.

Education, universal design and any other policy that brings these voices into the discussion will be huge steps towards making the country fairer and more democratic.

The Discussion of Universal Design

Nicolas Valencia: How do architecture schools approach this issue today?

Victor Delaqua: The discussion of universal design does exist in architecture schools, but it always comes up as something peripheral to the project and not as something fundamental. In general, the academy is a space occupied by many privileged people, and it is hardly representative of the problems of the vast majority of the population. This issue certainly precludes discussion and advancement of the subject of universal design as an essential factor of architectural and urban design education.

Nicolas Valencia: Where is that battle happening?

Victor Delaqua: In small discussion groups, excluded from massive audiences. I think the first step would be to show people that universal design includes not only people with disabilities — which is already a considerable portion of the population — but also children, the elderly, and more.

Matheus Pereira: Unfortunately, today's architecture schools continue to reproduce the teaching model on the universal design from the last century. There seems to be a rule in this topic where we only talk and design according to physical disability or reduced mobility. However, in broadening the debate about gender, race, and culture, there seems to be no "right" or "wrong" as teachers generally seek as an evaluative method.

On the other hand, young people seem to be increasingly attracted to diversity issues, and putting the city as a background for these discussions provides practical examples of how urban design can increasingly improve and help break down silenced barriers.

Neutral is No Neutral at All

Nicolas Valencia: It seems that universal is for nobody and everybody at the same time, a sort of generic city.

Eduardo Souza: Like, are we designing cities for young people working on MacBooks drinking cappuccinos? I think trying to understand and design for audiences other than yours is important. Try to put yourself in the other's role.

Romullo Baratto: Women and minorities must be involved in the entire design and construction process. However, I believe that what makes a space public is its use after being built. Unfortunately, there are no strict ways to define this. We can try, creating physical and invisible parameters, but there will always be the variability of daily life that can transform spaces, making them truly public or not.

Matheus Pereira: We see the false promises of public urban space everywhere. People think that simply adding benches for people to socialize on is creating a democratic space.

Eduardo Souza: I believe architecture should be more neutral, like the background to life.

Nicolas Valencia: But there is no neutral. What is thought to be neutral is always constructed by someone. For example, Koolhaas speaks about the generic city, but it isn't a neutral city.

Romullo Baratto: The idea of neutrality is complicated. There is always someone or a group of people in charge of establishing the rules, setting the tone. And there are always invisible values involved.

Victor Delaqua: It's impossible to be neutral. If I design a white modern building thinking that this is neutral, I will be completely wrong. A lot of people will look at this and think that purity is beautiful, but on the other hand, a lot of people will consider it lacking in life. For me, it's all about the culture of each person. Even more importantly, all of us need to learn to listen to and respect different ideas. Architecture is obviously not the solution to all the problems of the world, but it allows some to occupy fairer spaces in society and also to amplify their voices.

Eduardo Souza: The ideal city for a dog is one that has a pole every meter. My point is: if we'll never have unanimity, why don't we try a middle way?

Nicolas Valencia: There's no middle way either. The middle is defined by its boundaries. Brazil is a good example: the middle point of the political spectrum is pretty different now in comparison to 10 or 20 years ago.

Victor Delaqua: As a phenomenon inherent to the human condition, understanding and respecting diversity should stimulate and enable solutions that build a society centered on all individuals. We shouldn't try to create neutral designs because even a neutral or middle way cannot be the same for everyone.

Romullo Baratto: I agree with Victor when he talks about neutrality being different for each individual. The problem with architecture is that it builds things in the physical world and necessarily establishes rules, limits, and boundaries.

Eduardo Souza: Can you name a building or space that achieves this desired consideration of the individual?

Victor Delaqua: The Sesc network on São Paulo is a prime example. You can see that every generation, gender, or other type of diversity hang out together in different parts of the same building.

Eduardo Souza: It is great, obviously, but I am sure that some groups are not attended there. And my point is: it's not just the architecture itself that makes it accessible. But the whole program and the concepts behind the foundation of the institution. The same architecture in another context could not be so accessible.

Romullo Baratto: I don't believe any architecture is absolutely positive. Even the Sesc network architects must try to put themselves in other people's shoes when designing. However, this could be a good starting point to make spaces more accessible to all.

Victor Delaqua: Nature is diverse and resilient only because of this diversity. When we try to eliminate this diversity — as we did in modernism — we already know this doesn't work and frustrates a lot of people. It's impossible to please everyone and make a perfect universal city, but we should as architects and citizens look for a more diverse city that accommodates everyone. 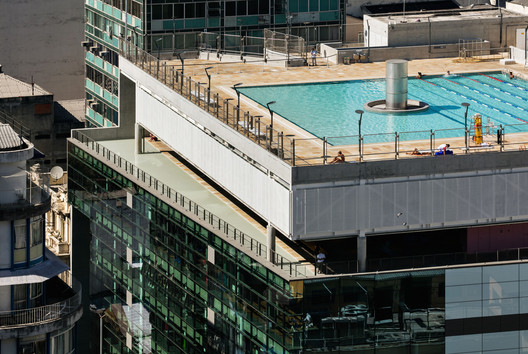