Based on research conducted as part of the Computational Design (CoDe) degree at the University of New South Wales in Sydney, we argue that large-scale rapid urban developments in combination with vast amounts of data are beyond human comprehension and consequently need to be synthesized when designed.

In the synthetic design method I’ve outlined below, I aim to sketch out a hypothesis that could potentially influence what design might be and how it might be produced in the second machine age.

What is the starting point and motivation for investigating this new method? To answer, one first needs to introduce the term “machine age”; explain what defines a machine age; reflect on how the first machine age has influenced architecture and urban design; and lastly outline the second machine age.

The first machine age can be roughly defined as an industrial era from the 1880s to 1945. It matches a late part of the Second Industrial Revolution as well as the rise of modern art and modernism in design, architecture and urban planning [1]. From an economic viewpoint, a machine age is defined by general purpose technologies, technologies that affect the entire economy.

For the first machine age, the combustion engine and electricity were among the technologies that most drastically altered the economic and social structures of societies around the globe, but they also altered their design, architecture and urban planning.

This can be shown through two causalities: no combustion engine - no car, no car - no urban sprawl; no electricity - no elevators, no elevators - no high-rise buildings. Without a doubt, general purpose technologies influence architecture and urban design. Our cities would look very different without the combustion engine and electricity. One can therefore make the argument that current general purpose technologies will have a similar effect on architecture in the second machine age.

The term “second machine age” has gained prominence through a recent seminal publication titled The Second Machine Age: Work, Progress, and Prosperity in a Time of Brilliant Technologies [2]. For the authors, current general purpose technologies include: Big Data, Internet-of-Things, social media, user-generated content, machine learning, artificial intelligence and digital fabrication–all 21st-century technologies that form part of our daily lives and that are transforming our cities and the way we will design in the second machine age.

Whilst Big Data and the Internet-of-Things have been and will be the “Eyes of the City”–the theme of part of next year’s Biennale–one also needs to comprehend what has been “seen” and how to react to it. Thus, one needs not only to “see” but also “think”–to process the vast amount of data produced in the past, present and future of a city in order to address global challenges such as rapid urbanization due to population growth, climate change caused by greenhouse gases, and migration between countries and from rural to urban areas.

One can argue that these challenges result in the development of vast greenfield and brownfield areas with a transport-focused orientation, as is the case locally with Western Sydney or internationally on a far larger scale with the Pearl River Delta.

One can also argue that these developments are too large in size, with their time frames too pressing, and their financial and political dimensions too complex, to design them via conventional design methods.

As mentioned at the start, these large-scale, rapid urban developments, when combined with vast amounts of data, are beyond human comprehension and consequently need to be designed in a synthesis. How do we define synthesis in the context of the Bi-city Biennale of Urbanism/Architecture Shenzhen?

I will refer to an early example of human-machine interaction (machine learning). After being beaten by the IBM supercomputer Deep Blue in 1997, Gary Kasparov introduced advanced chess. His objective was to let a human player and a computer chess program play as a team against other such pairs. After introducing the idea to the chess world, many proponents claimed that the quality and level of chess had improved to heights never before seen [3]. We argue that a similar strategy of human-machine interaction needs to be applied to design in the 21st century.

A synthetic design method could provide insights that go beyond data visualization, allowing humans to evaluate and select from multiple options, and thus writing a new chapter in the relationship between digital technologies and the city. We can imagine a synthetic design method combining machine learning with computational design for an optimized design workflow that can be used by people in the Architecture, Engineering and Construction (AEC) disciplines.

With machine learning, we could study algorithmic and statistical models, perform tasks without a specific pattern and develop algorithms that improve automatically through experience: Computational Design as a “process [that] starts with elemental properties and generative rules to end with information which derives form as a dynamic system” [4]. This could then allow us to link the predicted data to geometry using dimensions as measurable extents of a particular kind and with particular parameters, as measurable factors forming part of a set that defines a system or sets the conditions of its operation.

On what observation can one base a hypothesis of a synthetic design method?

Firstly, projects now need to be completed in a shorter amount of time, budgets do not allow for extra staff, and firms still manually produce design iterations or documentation drawings via staff members operating a CAD program and entering information–aka by drawing a design.

Secondly, with the increase in complexity within a project, sharing information and communicating it efficiently has become a must.

Lastly, while CAD programs are now the norm in AEC firms, they do not necessarily make full use of computers’ power to process huge amounts of information thanks to programmed and automated processes and efficient management tools.

Using these observations as a basis for the hypothesis, one could ask: What are the obstacles for an uptake of a synthetic design method?

Here we see a need for changing the current business model in the AEC industry from a linear value chain to a networked value chain–consequently, architecture and urban design becoming platform businesses. A platform is a business based on enabling value-creating interactions between external producers and consumers [6].

Incumbent industries have already been disrupted and their pipeline business as a linear value chain transformed to a networked value chain. Well-known examples here are transportation services (Uber) or hotels (Airbnb).

Whereas in a linear value chain a business employs a step-by-step arrangement for creating and transferring value, with producers on the one end and consumers on the other, in a networked value chain, value may be created, changed, exchanged and consumed in a variety of ways and places, rather than flowing in a straight line from producer to consumer, all thanks to the connections that the platform facilitates [6].

A platform, set up as a two-sided network platform with browser-based modelling, is in the position to connect architects, planners and engineers with computational designers and software engineers and enable a synthetic design method.

Whilst no AEC platform business on the scale of Uber or Airbnb is yet on the horizon, the AEC industry comprises 8% of Australia’s GDP and is the largest non-service related industry, contributing $134.2 billion to the country’s economy. It will be a very likely target for disruption through a platform business model. “The compulsion of new technological developments” [1] in the second machine age might mean that the architectural profession will not be the same in a few years.

Associate Professor M. Hank Haeusler Dipl.-Ing. (Fh) / PhD (SIAL/RMIT) is the Discipline Director of the Computational Design degree at the University of New South Wales, Sydney, the world’s first Computational Design Bachelor degree. Haeusler is known as a researcher, educator, entrepreneur and designer in media architecture, computational design and second machine age technologies, and is the author of seven books and 70+ book chapters, journal articles and conference papers. He has taught and lectured internationally at several universities, is Professor at the Advanced Visual Innovation Institute at the Central Academy of Fine Arts, Beijing, and Director of the Media Architecture Institute, Sydney.

[6] Parker, G; Van Alstyne, M W, Choudary, S P (2016) “Platform Revolution: How Networked Markets Are Transforming the Economy - and How to Make Them Work for You”, W. W. Norton & Company. 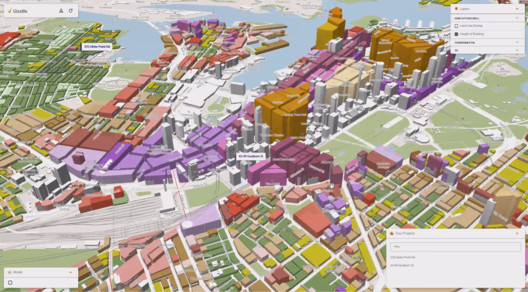