Japanese architect Kengo Kuma won the closed contest to design the expansion of the gardens of the Gulbenkian Foundation in Lisbon and the new entrance of the Modern Collection of the Gulbenkian Museum. The result was announced last Saturday by the Portuguese newspaper Expresso.

According to the chairman of the board of directors of Gulbenkian, Isabel Mota, the extension of the garden, located between Plaza de España and Largo de São Sebastião da Pedreira, will "form a large urban complex for the city." In addition to the garden, the winning proposal by Kuma comprises the accessibility project for the Moderna Collection building, with two new entrances to the buildings and connecting paths between the headquarters and the museum, and the enlargement of its exhibition area to 700m ².

Kengo Kuma has another project in progress in Portugal: the requalification of the Municipal Matadouro do Porto, developed in partnership with the Portuguese office OODA. In Brazil, Kuma designed, together with the FGMF office, Japan House São Paulo, inaugurated in 2017 and known for its wooden bars façade. Among his biggest recent projects is the Tokyo's National Olympic Stadium, which will host the opening ceremony of the 2020 Olympic Games. 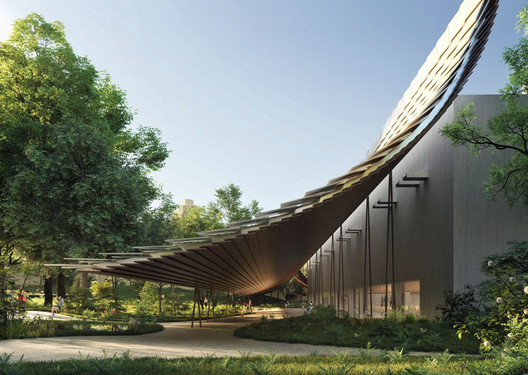