Construction has begun on Kengo Kuma’s design for the Tokyo 2020 National Olympic Stadium, a year after the scheme was selected to replace the original stadium design by Zaha Hadid Architects and three and a half years before the event’s opening ceremony on July 24, 2020.

The three-tiered, 80,000-seat wooden lattice stadium is estimated to cost $1.5 billion USD, more than the project’s original $850 million budget but significantly less than the $2.1 billion estimated for ZHA’s design prior to its scrapping.

The stadium will be located on the site of Kenzo Tange’s 1964 Tokyo Olympic Stadium, which was demolished last year to make way for the new structure. After ZHA’s scheme was criticized for being out of scale, the redesign takes a lower profile with a sunken playing surface and a lightweight timber lattice structure inspired by Japanese temple architecture.

You can read through the project’s full saga, here, and check out new renderings of the project released by the Japan Sports Council, here.

News via The Guardian, Architect’s Journal. 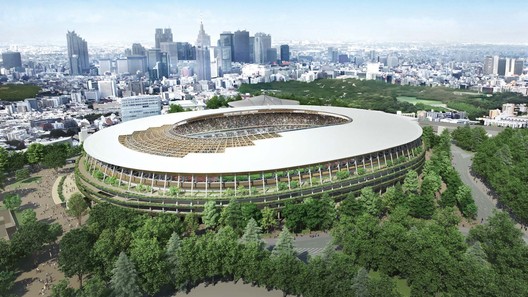