Text description provided by the architects. Recently completed, the Bastion Community is a 58-unit fully affordable housing development centered on the needs of post-9/11 combat veterans, many with lifelong medical challenges, and their families and caregivers. Bastion leverages this concentration of services members with shared life experiences towards a community health model for long term care, support, and integration into the world. It is also a unique type of housing, the first such development of its kind, that addresses the gap between dedicated care facilities and market housing.

The development is located in the Gentilly neighborhood of New Orleans, Louisiana. Developed initially by post-War veterans during the suburban boom and historically a thriving area of the city, it suffered an extreme loss due to the flooding caused by Katrina. The site, a rare 5.5-acre contiguous parcel, was until the flooding was home to a large multi-family complex. Being within a few hundred feet of the London Canal breach — the source of the neighborhood flooding — what remained of the existing housing had to be removed in the cleanup efforts.

After more than ten years of vacancy, the Bastion organization chose the site to create their housing community, the first of what is meant to be a scalable model. In creating the housing here, the objectives were to develop a massing and spatial organization that both supported the mission and integrated into the surrounding neighborhood. The result was a building design and site configuration that was economical, sustainable and socially resilient. While the form of the project may appear to be slightly complex, the project’s construction logic is derived from typical mass-delivery model for single- and double-family homes. Pile-supported, raised dwellings allowed the units to hover above the ground, providing open space for groundwater infiltration while ensuring the historic oak trees’ root systems remained undisturbed.

At the scale of the house, units are paired twice: every residential building consists of two attached units that face another double, effectively creating an open court shared by four neighbors, which was deemed the optimal social network to ensure meaningful relationships between tenants. Each actively engaged cluster of four units, carefully located between the existing oak trees, is connected to a larger, central courtyard, connecting residents with an intentional community while still maintaining an open relationship with the surrounding neighborhood. 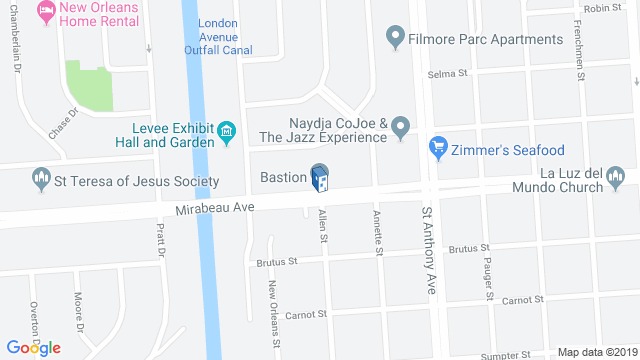 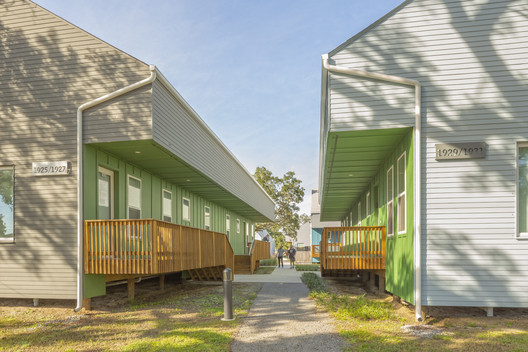