Dutch design practice MVRDV has reopened their 2016 project Crystal Houses with a new tenant and façade. Located on the high-end shopping street PC Hooftstraat, Crystal Houses initially hosted a temporary store for Chanel. The project’s jewel-like façade was proposed as a way for Amsterdam to be home to distinctive, upmarket flagship stores without compromising the city’s historical character. Now the project has been renovated and re-opened for French luxury brand Hermès. 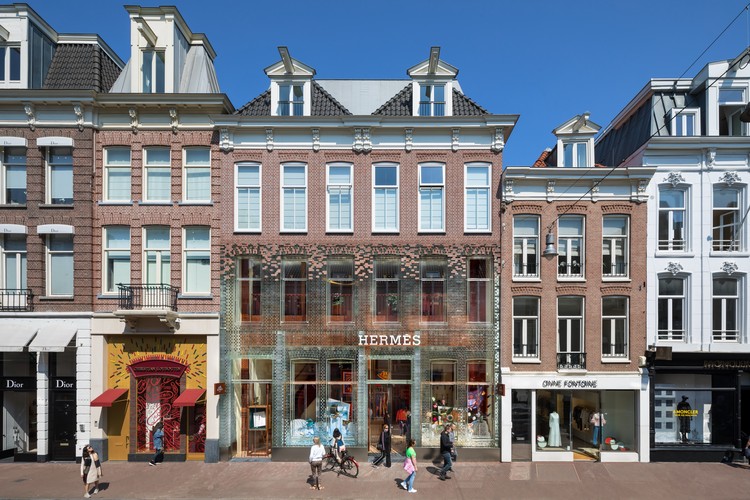 As MVRDV stated, Crystal Houses was envisioned as a recreation of the traditional houses that make up PC Hooftstraat, with a dramatic twist: the usual brick façade is replaced by a glass replica, which dissolves into the traditional terracotta bricks on the upper level. The project was created for Amsterdam-based retail real-estate company Warenar.

To replace the brick façade with a glass replica, MVRDV worked with TU Delft, engineers ABT, and contractor Wessels Zeist, and with materials provided by glass manufacturer Poesia and Delo Industrial Adhesives. The research turned into a shopfront that combines the transparency of a retail façade with the intricate complexity of traditional brick construction.

As the team explains, “Due to the spatial requirements of the temporary Chanel store, the impact of this transparency was previously diminished by a blind wall on the first floor, behind the upper portion of the glass façade.” In the new Hermès store, interior designers Bureau de Binnenstad removed this wall and opened the floor to the exterior, for the first time allowing visitors to see the close-up the dissolving effect where the glass bricks meet terracotta bricks – and finally taking full advantage of the transparency of the design. 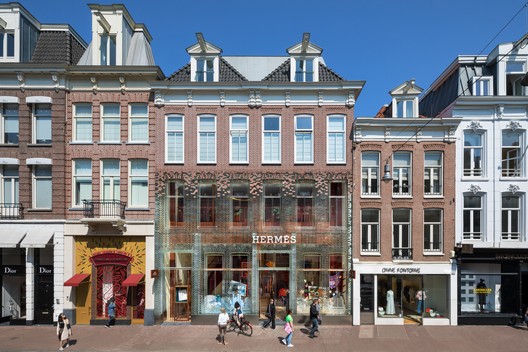