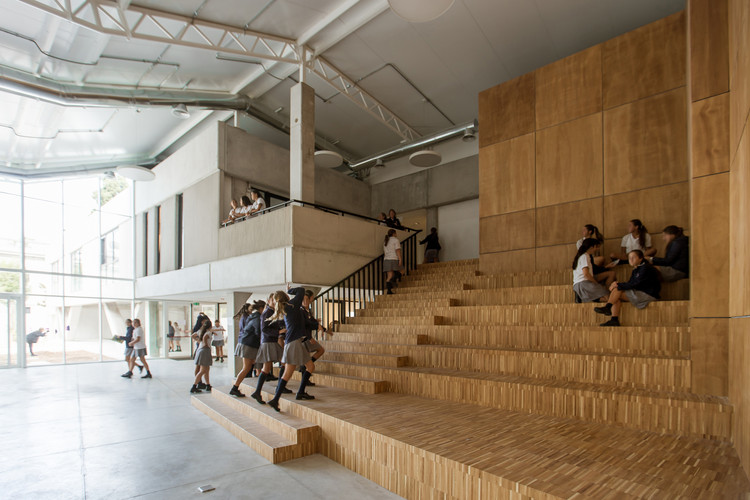 Text description provided by the architects. The project arises from the need to expand the School Los Pilares, located in ​​Montevideo, prominently located along the José Batlle and Ordoñez Park.

The expansion of the school Los Pilares involved the construction of a new building, placed on the center of an existing site, connecting the two existing school buildings. The new building presents two volumes, one developed in two levels with primary school classrooms, and the other one developed on a single level, raised over the outdoor playground, where the new middle school classrooms are located. The new intervention joins the main existing building, with patrimonial character, through a new space called "Heart", which acts as an articulator of the whole.

The heart is the main space of the project, a flexible meeting place and physical support for different activities, such as workshops, auditorium and even the extension of the existing chapel. It is both a space of reflection and of play, being able to adapt according to the school needs and specific temporary activities, offering a closed interior space when it is not possible to use the outdoor spaces.

The volume of middle school raises from ground level, allowing the connection between the two playground areas (1+3), generating a third covered intermediate space (2), designed for the development of activities such as exhibitions or group talks with weather shelter. This system of courtyards and playgrounds allows the school to have two simultaneously outdoor activities, where due to the building orientation each space acquires a particular characteristic of sunlight during the day.

The project was built with a precast concrete structure system, combined with traditional concrete systems, allowing the completion of all the work in 10 months. The façade is composed of a series of precast concrete panels with textured or smooth finishes and black aluminium openings. The alternating solid concrete panels and glass openings compose a rhythm that unifies the two volumes of the project.

The classrooms where designed according to the needs of the school, having modules of 42m2. These modules where grouped into pairs, where easily by means of acoustic movable walls two modules can be unified, having a different classroom format of 84m2.

This approach corresponds and adapts to the trends of the new educational systems, allowing a wide range of spatial configurations, encouraging the development of different activities within the classroom. 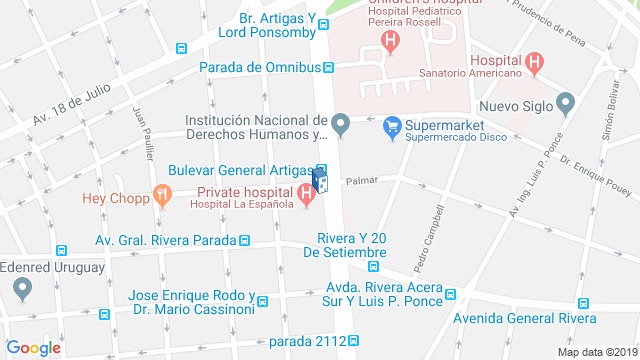 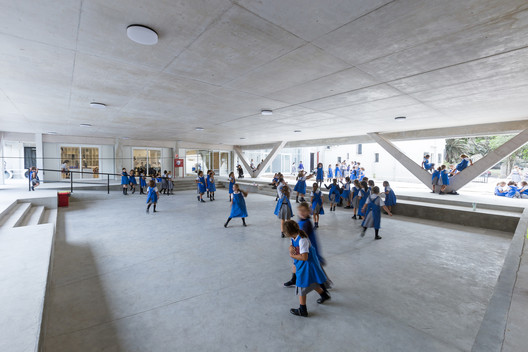