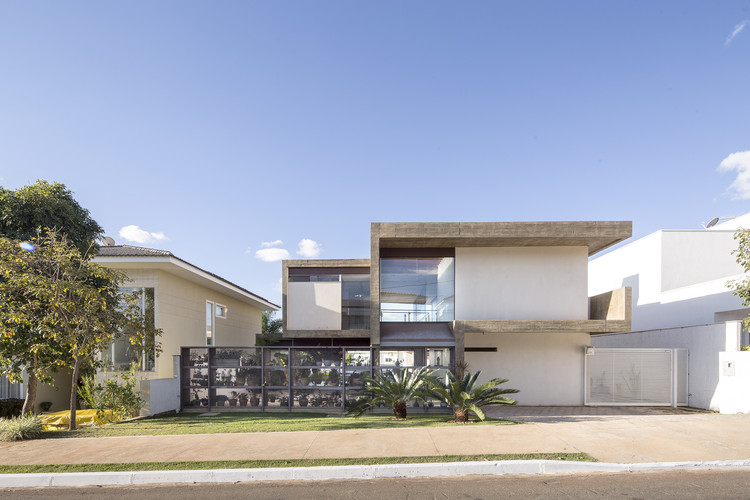 Text description provided by the architects. A modern house with wide spaces and integrated with the landscape, socially alive and full of regional references. The Bentes The house project sought these concepts to embrace a small - but expandable - family from Pará (Brazil). Located in a well-organized and almost completely constructed condominium, the residence sought to fit the local climate and context while taking advantage of the beautiful view of a nearby valley to the north.

The main principle for this residence was to take advantage of the local construction norms aiming at a better use of the areas and the integration of the house in the landscape of the street. In the condominium, the front recoil of 5m cannot be walled, which creates a pleasant and safe street, with the façades of the houses well visible and socially integrated. However, during a visit to the place, one can observe the constant presence of open garages and exposed vehicles. To avoid this situation and seeking a closer approximation of the cars with the services core of the house, it was decided to bring the garage to the central portion of the lot, through an access on the right side. Thus, located next to the leisure nucleus of the house, the garage becomes an easy daily access space, but with reversible use on celebrations.

The choice of the southeast orientation for the rooms on the upper deck influenced the positioning of the 3.3m lateral recoil for passage of vehicles on the right side of the lot, and, at the same time, the non-use of the left side, where the house is leaning against the wall of the ground floor. This lateral passage organizes the distribution of house functions in a linear volume on the ground floor, which accompanies almost the entire 40m extension of the lot. There, the office/guest room, the bathroom adapted for the disabled, the kitchen - positioned to be the functional nucleus of the house - are integrated with the barbecue and service area, the garage and an independent annex, with the leisure bathroom, a small deposit and dependence.

In contrast to this line, the upper volume is arranged perpendicularly, forming a T-shaped plant. In this portion of the house, oriented from southwest (front) to northeast (back), the internal social areas of the residence - dining room, living room and home theater - were arranged on the ground floor and the suite of the couple on the upper floor.

To generate a volumetric distinction between the two portions of the house and increase the visual integration, the central area of the house has a double right foot from the main front access until the leisure area. The emptiness generated is at the same time an organizer, because it directs the inter-flow and circulation, and a guider, by being visible from all the rooms of the house.

A premise of spatial fluidity was tied to the continuity between interior and exterior of the residence. For this, the external spaces subdivided into three portions, with different scales. In the front part, next to the main access, an internal patio serves as a second living room, external, but more intimate by having the house itself as limits and a green wall - a kind of living fence/ panel, composed by pots of Marajoara (typical pottery from the north of Brazil) and different vegetal species. In the back, a larger and collective leisure area is visually connected with the upper terrace - area on the main linear volume - where you can find a better view of the beautiful valley surrounding the condominium. To highlight the view, the back of the house slopes slightly, seeking an alignment with the visual and a consequent topological relation with the surroundings. 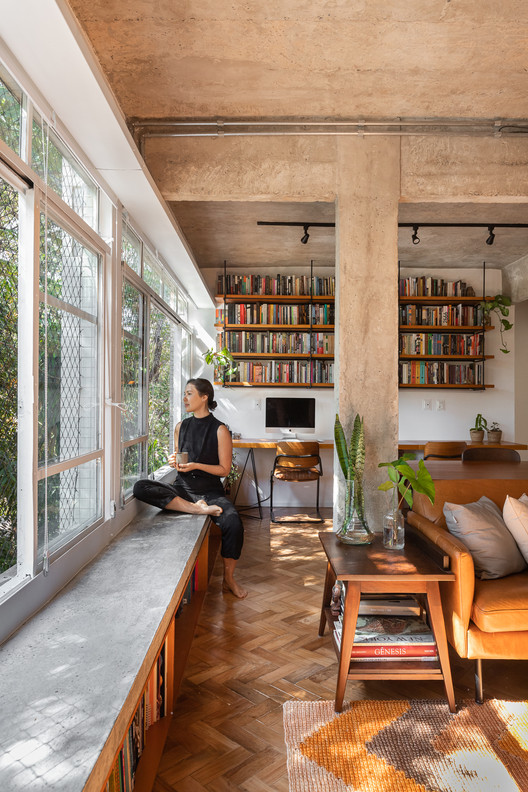