A historic site in the heart of Basel will soon be revived as Kaserne Cultural Center, the city’s new urban hub by Focketyn Del Rio Studio.

The 45 million CHF (44.7 million USD) transformation project is the first publicly-funded large facility in the Kleinbasel district, and will unite and unlock two previously disconnected and enclosed spaces on the Rhine River. The 9,000 sqm project by the Swiss firm is currently under construction and is expected to be complete in 2021. 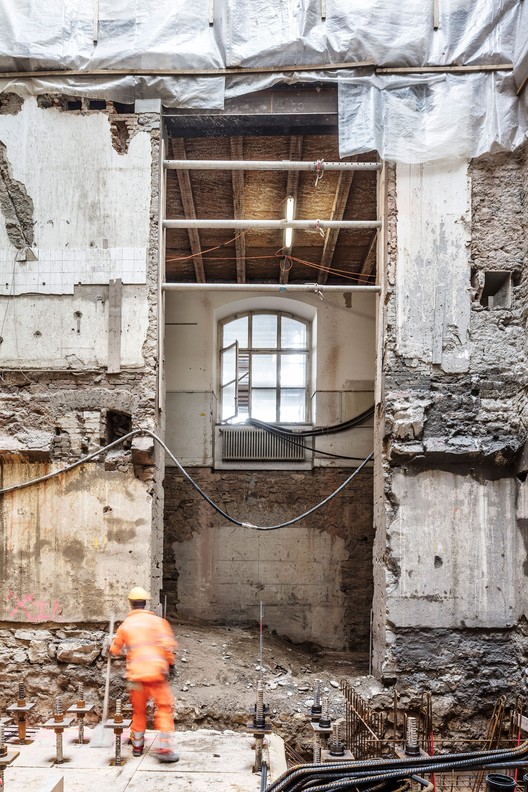 Kaserne is a popular cultural and communal district in the city of Basel, hosting several engagements, facilities, events, restaurants, and public parks. Before being chosen to become the district’s new cultural center, the site was a military complex 150 years ago for the Swiss army, but was abandoned in 1966. A government committee and community representatives decided to make use of the abandoned buildings without altering the existing structures, transforming the complex into a vibrant social hub for decades after, without any architectural interventions.

Focketyn Del Rio’s inhabitants-approved proposal ensures a sensitive, sustainable transformation of the historic complex. FDRS “refreshed” the facades of the buildings, keeping their original essence intact. The center of the building will become a large three-storey-high public ‘plaza’, providing central circulation and public gateway from the Rhine, to the building, and into the park. Since there was a need to integrate new pathways, the architecture studio introduced two passages on the edges of the structure, and transformed all ground floor windows into doors. The design established a harmonious flow with the surrounding urbanscape, greatly inviting to the public.

When we found the building, it was too shy to open itself up to the river. With our intervention, we only realize the potential that has always been there - the building invited us to do exactly what we are doing. It is not our aim to be noticed. We are convinced that once the transformation is complete, you will forget how it was before - Focketyn Del Rio Studio

The versatile interior of the Kaserne Cultural Center will see the most radical changes in the transformation proposal. FDRS designed “poly-typology” rooms, which are enclosed spaces that can become corridors, and vice versa. A constant flow of circulation is explored by the introduction of two vertical stairways as long corridors. On top of the plaza, several large halls and public spaces are spread throughout the building, allowing public access to its entirety.

We found a building that was mute and didn’t speak to its surroundings and communities. Very soon, it will speak multiple languages in multiple places. The animation in the building floods out into the public space: Previously restrained and trapped inside a silent box, new activities will circulate from the inside to the outside - Focketyn Del Rio Studio