Save
"I Lean Toward Forms that Lead to a Point and that Try to Make a Point": In Conversation with Daniel Libeskind
Share
Or
Copy

Recorded on August 31st, 2011 at the architect’s New York office

I first met Daniel Libeskind on December 18, 2002, when he presented his vision for the New World Trade Center at the newly restored Winter Garden of the World Financial Center. I see that morning as the birth of starchitecture phenomenon and him as the very first starchitect, as he presented first in front of the mainstream world media and the way he did it, it was clear – here is the winner. Something clicked, and I thought – I must interview this great architect, even though I have never interviewed anyone before. But as soon as he left the stage, the man was mobbed by the press. Dozens of superficial questions flew his way… I looked across the grand atrium and saw the architect’s wife, Nina, standing proudly, but alone. We had a quick chat and set up my very first interview for the following day!

That conversation was stretched over the entire day. I followed the Libeskinds up and down Manhattan, interviewing him whenever a few minutes could be spared here and there, between many of his short, fast-paced meetings. That interview turned out to be very specific and mostly devoted to his original vision he called Memory Foundations, which was not meant to be. Almost ten years later, I had another chance to interview Libeskind at the comfort of his New York office. Our 40-minute engaging conversation took place on August 31st, 2011, in the anticipation of the 10-year anniversary of 9/11. It was squeezed between his interviews with Der Spiegel and BBC. The following is a 10-minute voice recording, accompanied by 60 slides of the architect’s work. This year the feature was presented at my exhibition “I am Interested in Seeing the Future” as part of my Architects’ Voices exhibition series at Fab-Union Space in Shanghai along with nine other interview recordings.

NewsArticlesvideoInterviewInterviewsDaniel LibeskindVladimir Belogolovsky
Cite: Vladimir Belogolovsky. ""I Lean Toward Forms that Lead to a Point and that Try to Make a Point": In Conversation with Daniel Libeskind" 26 May 2019. ArchDaily. Accessed . <https://www.archdaily.com/917725/i-lean-toward-forms-that-lead-to-a-point-and-that-try-to-make-a-point-in-conversation-with-daniel-libeskind> ISSN 0719-8884
Save 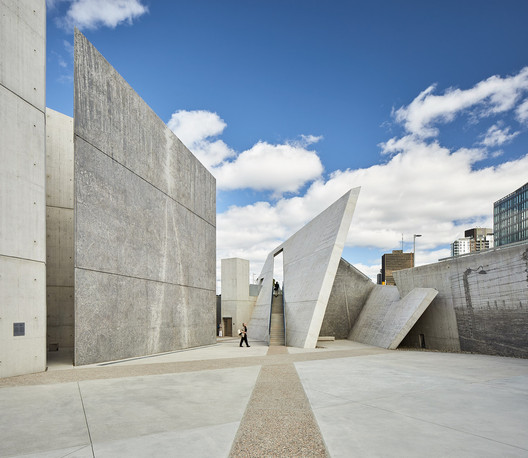