Save
Roof Waterproofing with Water: A Solution by ‘Brasil Arquitetura’
Share
Or
Copy

During the modern period, the buildings that used the traditional sloping roofs with tiles, draining the waters as quickly as possible, have begun to give way to the well-known 'waterproof flat roofs.' In spite of delivering a clean aesthetic to the project, allowing the use of the last slab as a space for living and contemplation, this solution can become a headache for its occupants if its execution and design are not careful. It is no accident that there have been infiltrations in famous modern buildings, such as the Vile Savoye or the Farnsworth House, designed by great masters of architecture. Currently, the civil construction industry has developed more sophisticated products and techniques that drastically reduce the chances of subsequent infiltration. However, we could say that waterproof flat slabs continue to be fragile points in buildings. The architects from Brasil Arquitetura have improved an inventive and very simple solution to avoid infiltrations in flat slabs, much used in the 70's by architects like Paulo Mendes da Rocha and Ruy Ohtake, filling them with vegetation.

During the concreting stage, the traditional process of curing the concrete with water is extended, and in this case the water is left there eternally. The water is the waterproofing itself, saturating the concrete that doesn’t overflow anymore. This is because, by constantly filling the slab with water, temperature variations in the structural part are diminished, which are what normally cause most of the cracks that can become infiltrations difficult to control. That is, the slab doesn’t acquire the points of capillarity that would lead to permeability. It works as a mirror of water, on which  layers that support the grass and the sowing of the garden are added. Constant level of water is controlled by a simple valve, located at one end of the deck.

According to Cícero Ferraz Cruz, architect at Brasil Arquitetura, "it's a very simple and cheap system, it regulates, waterproofs, provides mechanical protection and has a very low maintenance, it doesn’t require tilting, because the extra water comes out by extravasation and not by drainage, and it doesn’t deliver an additional load on the structure. It also guarantees thermal comfort. Everything that happens is within eyesight, it’s not like in the conventional system where there is a leak under the slab, the point of infiltration can be many meters away."

The solution can be used in any type of slab that is used as the only cover, where there will be no roofing later. It also requires the use of a wall, parapet or any other element that serves as an edge for water.

During the execution, the basic precautions of the whole slab must be taken. During its useful life, it’s important to maintain constant water level through valves and drains, and avoid the appearance and spread of mosquitoes through the incorporation of fish or chlorination, or covering the system with soil for the growth of a garden. 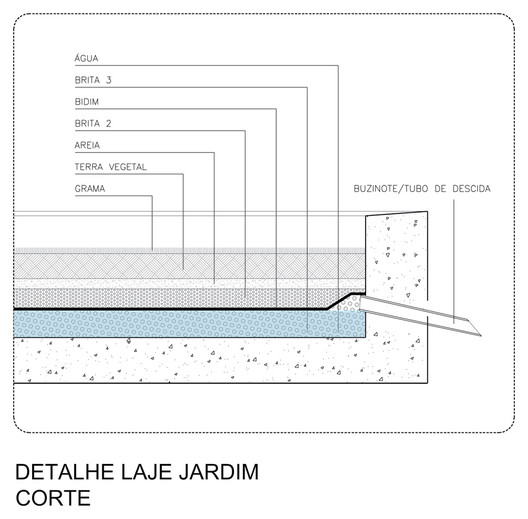