Save
The Good Metropolis: From Urban Formlessness to Metropolitan Architecture
Share
Or
Copy

From the Publisher:
The book presents the first historical analysis of the productive tension between the city and the architectural form. It introduces 20th-century theories to construct a historical context from which a new architecture-city relationship emerged. The book provides a conceptual framework to understand this relationship and comes to the conclusion that urbanization may be filled with potential, i.e. be a Good Metropolis.

From the Back Cover:
Architecture has always been engaged in a dialogue with the city--a relationship often dominated by tension. The architectural avant-garde, in particular, is commonly understood in its opposition to the existing metropolitan terrain (architectural form vs. urban formlessness). This book, however, unearths strands of thought in the history of 20th-century architecture that actively endorsed and productively engaged with the formless metropolis. Revisiting early experiments that question the city/architecture dichotomy, Eisenschmidt reveals how the formless metropolis has long been a prevalent force within architectural discourse. The works analyzed span almost an entire century: They range from August Endell's urban optics and Karl Scheffler's metropolitan architecture in Berlin, through Reyner Banham's motorized vision of Los Angeles and Situationist performances in Paris, to OMA's city architectures and Bernard Tschumi's cinematic urbanisms. The author constructs new narratives that reposition architecture vis-à-vis the city, by exposing hidden histories. He uncovers architecture's continuing interest in the formless city and elucidates our current fascination with and anxiety about ongoing urbanization, revealing the "good metropolis" that was there all along.

Reviews:
"The Good Metropolis brilliantly explains how the formless, unpredictable, unknowable, and out-of-control metropolitan condition--seemingly the assassin of architecture and of "the good city"--became an exhilarating resource for architecture (think of the enormously influential work of Rem Koolhaas's Office for Metropolitan Architecture, for example). Moreover, the book's deep scholarship of Berlin reinstates that city as a veritable laboratory of modernization, alongside London, Paris, Chicago, New York, and Los Angeles, in effect combining two long-needed studies into one."
Simon Sadler, University of California Davis

"Modern urban history frequently grounds the postmodern recognition of the city's indeterminate dynamism in earlier planners' failed efforts to wring rational and geometric order from the rough currents of industrialization, rapid technological change, and unprecedented demographic growth. The Good Metropolis presents an alternative trajectory: a searching determination on the part of key figures over more than a century to see in the alleged chaos of the city alien and potentially productive orders otherwise impossible to envision. In this theoretically crisp and elegantly written essay, Eisenschmidt identifies the generative tradition of urban inquiry that designers forged to come to terms with, and to learn from, a human creation beyond human comprehension: the modern city."
Sandy Isenstadt, University of Delaware 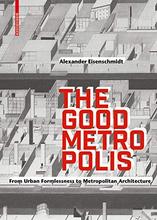