Lebanon-based firm JPAG has created a short architectural movie titled “Coming Back to Life” which uses an abandoned icon from the Lebanese civil war to generate a modern day fairy tale. The Burj El Murr (Tower of Bitterness) has been reimagined in a cinematic narrative loaded with emotional content and dramatic sceneries, in an attempt to generate new understandings of what an architectural concept is.

The soaring monument in the heart of Beirut becomes the stage for five scenes. The first scene reveals a mystery man entering a gloomy apartment facing the architectural icon. Surprised by an emerging structure suspended on the walls of the tower, we are then transported inside the tower, ascending the body of concrete brute. Having passed the voids, green space, memorial, and reception area, we land outside to discover a monument elevated from the ground. The story ends with a shot of the tower in its newly-grown skin, standing tall among the disturbing chaos of the city.

Below, we have republished the artist’s description from the story’s five chapters. For more information, visit the official website here.

Overseeing the iconic downtown area, looming out of the old building’s silhouette, a tower still stands tall. Burj El Murr, a 40-story monument, rests unfinished; its construction interrupted by the Civil War in 1978.

Initially an office block, the hopes of it becoming one were shattered as it was transformed into a hideout for numerous snipers – giving them more than 2KM of a panoptic view in all directions – and a host of endless bloody battles.

Today, the abandoned building remains an icon situated as a reminder of the horrors and cruelty that the nation has overcome, however standing spiritlessly, hoping for someone to save the life that was never actually given to it.

Chapter Two: Coming Back to Life

A metallic frame starts covering the tower, hovering above the urban fabric of Beirut City, creating an extension for the streets from the bottom towards the top. Life begins to pop up on the façade, as the new structure becomes the essence that makes the tower come back to life, radically shaping and framing the life in it; producing a framework for flexible programs which could change and develop over time.

The circulation path sits on the frame along the edifice, climbing its walls with ramps on the sides; now people can walk throughout the tower with new streets placed between two platforms of public spaces, galleries, workshops, souks, marketplaces, green space, houses, gyms, an outdoor playground, libraries, bookshops, reading spaces, offices…

Trees start to grow inside the empty spaces, encapsulating the concrete, eating away its lifelessness and giving the tower a heartbeat; and so it begins, one branch at a time, a new green lung amidst the chaos of the city.

Gazing at the Beirut skyline, you can see the framework of the Burj break at the cityscape limit, creating a void inside of the monumental tower. This void is a leftover token from the past of the building and its journey through time, partly stripping it from the futuristic cape it has engulfed itself in, revealing the monument’s bare skin.

At the peak, between the wispy clouds, lies a dark room. You can hear the sound of silence, the wind murmuring, and passing through the tiny holes from the sides. A ray of light emerges through the crack in the ceiling, enlightening the names of the martyrs on the rusty wall.

The rain floods the concrete mushroom, the water drops racing on its surface to the floor and forming a pond under its umbrella.

Between the sullen days of clouds and dust, and the stormy nights of rain and darkness, stretching across the east, all the way to the west, a soaring monument stands tall in the dark.

In the midst of all the chaos, this relentless image is an indisputable legacy of war and a constant reminder of the tragedy endured by the people.

In spite of it all, the day has finally come to bring back the Burj from the dead.

This soulless body will rise again, to become the source of life itself, a beacon of hope, and a lighthouse for this sinking city. 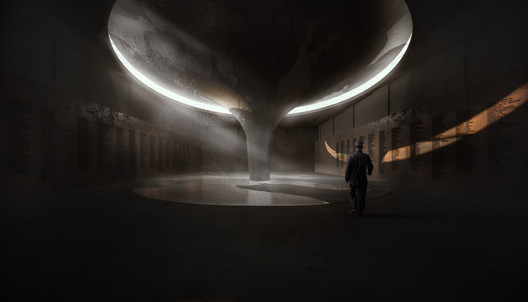