Save
Before and After: How Graphic Design Interventions Enhance Built Architecture

The perception of space and the way a building is perceived within its surroundings are always primary concerns when designing an architectural project. In order to meet these interests, a graphic intervention project can become a great ally to an architect, turning the building into a landmark which allows passers-by to interpret it more clearly.

Here, we gathered four examples of projects that received graphic interventions carried out by Nitsche Arquitetos, in order to explore how the use of colors and different graphics can further enhance the architectural language.

'The property is located at João Moura Street, deep in the valley through which the Sumaré Avenue runs. The João Moura Street is an important link between the Vila Madalena and Pinheiros neighborhoods. For those who are passing through Sumaré Avenue, the building has an outstanding presence. For this reason, we tried to give special attention to the north facade and perceive it as a large panel, composed of openings and colorful screens.'

'Particularly in the Minhocão [São Paulo's famed elevated highway] the blank facades form an impressive set of "empty canvases," as if the highway were a large suspended gallery on a metropolitan scale. The project, commissioned specifically for the Virada Cultural 2015 event, boosted this possibility through the painting of the 10-story and 10-meter-wide blank facade of the Paulo Theodoro Building, at 327 General Olimpio da Silveira Avenue, under the Minhocão.'

'This is a student housing building, in which the facades are distinguished by an organized and repetitive rhythm of balconies, an increasingly common feature among new developments in the real estate market. The intervention takes advantage of this rhythm, giving the building a simple black and white painting. At first, the design strengthens this built arrangement, highlighting the horizontal lines. However, as the painting spreads over the facades, the steadiness of this arrangement is radically transformed. The strokes in various orientations give the impression of a wrinkled, broken, deconstructed surface. Ironically, the painting denies its own background and subverts the building's architecture.' 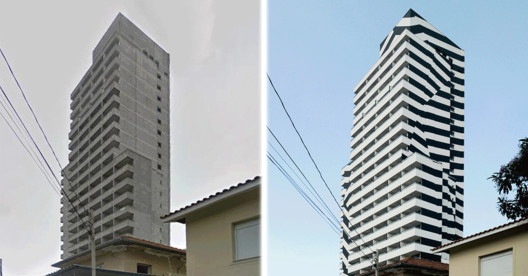