São Paulo 's famed elevated highway, the Minhocão is lauded for its dual use; during the day its serves as a highway, and at night, Sundays and holidays parts of the 2.2-mile roadway transform into a bustling public space. The Curbed reports , the densely populated space is lined with window-less towers and massive "Blind Walls," that Were once used the space for advertisement. However, since ads Were banned in 2006, artists have Begun to slowly transform these walls into beautiful art. Nitsche Architects is the latest to Intervene, exposing the inner life of one of the building's with a human-scale, monochrome wall. Read on for more images. 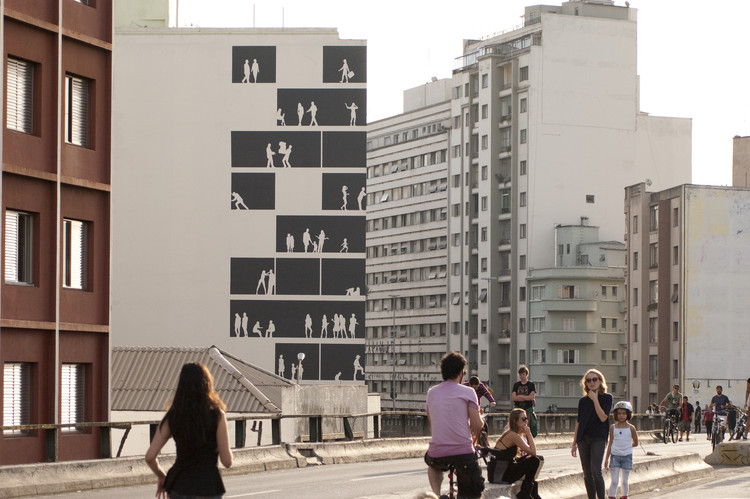 From the artist:  Laws que regulated building in downtown and surroundings allowed the construction near the setbacks in order to settle the front part of the street forming large built axes. With the changes of urban planning, the old buildings that did not follow the city transformation and the expectant lands ended up not conforming to this urban area, PERMITTING the appearance of the so-called "blind gables", the side part of the buildings next to land boundaries that did not have the continuity to another annex building.

These blind gables Appear the large walls without openings in buildings of São Paulo and are founded throughout the city. They Were used the huge advertising platforms until the municipal law was enacted and forbid such use.

But not only the market saw the potential of these spaces. They are the true object of desire to the graffiti artists and taggers, and this desire turn "bling gables" into "alive gables".

Particularly in "Minhocão Park" these blind gables form an impressive set of "white screens," as if this space was a large gallery suspended in metropolitan scale. However it is very important to say que Those blank spaces are not just "white screens", first of all They are buildings walls, like big slices of constructions, sections of the buildings in natural scale

The project, commissioned especially for the "Cultural Turnaround 2015" potentiated this Possibility with the painting of one gable with ten floors and ten meters wide, at Paul Teodoro Building, located at General Olimpio da Silveira Avenue, 327, under "Minhocão".

The project redbourn 4 weeks to be done, considering the possible negotiation with buildings; 5 days for the execution including the rent and the installation of one platform with 10 meters of track and steel wire ropes (for running the painting the head of a large printer) where three painters Could work; tube level, plumb, line marking and masking tape; 3 coats of black special paint for the floor and 43 adhesive masks: 43 silhouettes of living creatures drawn in negative with the existing bottom of the gable, people drawn with the city. 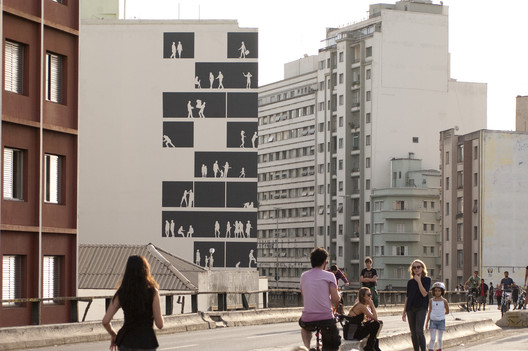