According to the jury, "what the winning projects have in common, apart from being excellent presentations, is an ability to combine social, political and contextual elements with innovative programmes, a critical engagement with the discourse, and restraint in the design process. Architecture is political. The question is whether or not you acknowledge that fact."

In alphabetical order, the winners announced at the award ceremony this Friday, May 3, at Centro Cultural Estacion Mapocho in Santiago, Chile, are:

The project reveals a method of materializing the power of dwellers and their spaces in the form of architectural interventions by devising a series of public installations. According to the jury, "it is socially minded, without goody-goody intentions. The project suggests a new form of political activism through the appropriation of urban residual spaces".

Following up the Foregoing / Maarten de Haas
Academy of Architecture and Urban Design
Rotterdam, the Netherlands

A data center, living conditions and daily routine of the caretaker confront us with the human condition of our time: an existence caught between the virtual and the sensorial, the all-inclusive and the personal, the managed and the accidental.
According to the jury, "in this ‘narrative’ project, architecture is deployed to tell the story of a social phenomenon and discuss the condition of daily life."

The project reflects upon concepts of identity, territory and resistance, and investigates the design of a versatile nature-based infrastructure capable of meeting both landscape and socio-economic demands. According to the jury, "the project is thorough and totally feasible,  and it is not made to convince clients but for the benefit of local inhabitants."

Set in the period after the Anthropocene, the project examines non-human culture’s role within architecture. According to the jury, "the narrative is a wonderful ‘sci-fi’ project. Not every project has to be plausible, and this one takes you out of your comfort zone."

The project seeks to deepen our knowledge of housing in today’s city. According to the jury, "the project is an investigation into the use of drawing as a representational tactic to tell a little story about life. Thinking about the concept of home is a compelling and urgent issue."

Located on the Crimean Peninsula claimed by both Russia and the Ukraine, the project explores the role of architecture in absorbing the conflict situation. According to the jury. "it is a strong project that intelligently tackles the agency of architecture on politics. The project is placed in a historical perspective and goes beyond actuality."

The design programme is based on a physical and conceptual excavation of the foundations of Warsaw, activating a form of ‘critical archaeology’ that strengthens the identity of places of memory and their deep meanings. According to the jury, "the designers adopt a very clear position on ethics and urban form in the past and in the future."

The jury members for 2019 Archiprix International were: 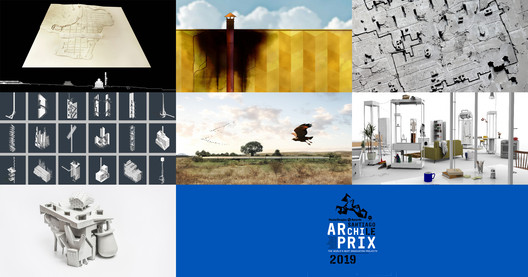