The SHoP Architects-designed 111 West 57th Street has witnessed a major milestone with the topping out of its reinforced concrete superstructure, as reported by New York YIMBY. The supertall scheme, measuring 1428-feet-tall, will be the second-tallest building in New York City by roof height, and the most slender tall building in the world.

The striking residential tower, located on Billionaire’s Row, two blocks south of Central Park, is designed with a glittering facade of glass and terracotta. The slender structure, constructed by JDS Development and Property Markets Group, will offer 46 super luxury apartments and is widely expected to be the “first $100 million sale in NYC”.

The scheme’s construction has called for the pouring of 49,000 cubic yards of concrete, and 100 tonnes of rebar across the 85-floor structure. The tower has been positioned to offer an almost perfectly symmetrical view of Central Park for residents.

Last year we reported on the scheme when terracotta façade pieces appeared to go missing. JDS told YIMBY “The gaps are where mounting brackets for the monorail system will go, and after the rig is jumped, it gets filled. There is also a system of redundant attachments to prevent anything from falling.” The highly transparent façade was designed to maximize views of the historic Steinway Building from the street as well as interior natural lighting.

The scheme is expected to be completed in 2020. 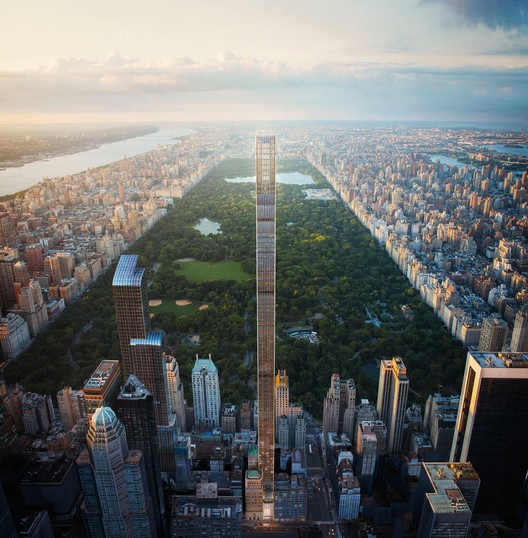