The 856-year-old cathedral sustained major damage as fire destroyed its central spire and two-thirds of its roof, as well as parts of its vaulted interior. Construction on the cathedral, which is considered one of the finest examples of Gothic architecture in Europe, began in 1163. The structure was completed in 1345, and now hosts 13 million people every year, an average of over 30,000 per day. The cathedral was undergoing renovations after cracks began to appear in the stone, prompting fears that the structure may be unstable.

The previous roof structure of Notre Dame dates back to the 12th century and was nicknamed “The Forest,” a space built of 1,300 timber frames. Foster has proposed an updated design featuring glass and steel, as well as the potential for an observation deck. Norman Foster told The Guardian that, “In every case, the replacement used the most advanced building technology of the age. It never replicated the original. In Chartres, the 12th-century timbers were replaced in the 19th century by a new structure of cast iron and copper. The decision to hold a competition for the rebuilding of Notre Dame is to be applauded because it is an acknowledgment of that tradition of new interventions.”

Prime minister Édouard Philippe made the announcement for the competition following a special Cabinet held by French President Emmanuel Macron on the reconstruction of cathedral. Philippe said the competition would give the cathedral “a spire suited to the techniques and challenges of our time”. So far, over one billion dollars have been pledged to rebuild Notre Dame.

Editors Note: Foster + Partners have not yet prepared a proposal, only expressing interest in the competition. 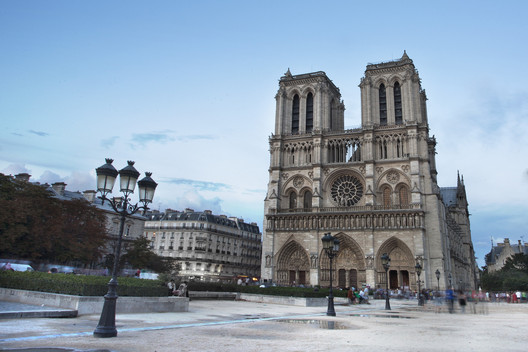