President Macron promised the nation on Tuesday night that Notre Dame would be rebuilt – and be “more beautiful than before” – within five years. Notre Dame was originally built over a period of nearly 200 years, starting in the middle of the 12th century. But the 300-foot spire was only added in the mid-19th century, during a major restoration project completed by the architect Eugène Viollet-le-Duc. “The international competition will allow us to ask the question of whether we should even recreate the spire as it was conceived by Viollet-le-Duc,” Philippe told reporters after a cabinet meeting dedicated to the fire. “Or, as is often the case in the evolution of heritage, whether we should endow Notre Dame with a new spire. This is obviously a huge challenge, a historic responsibility.”

The fire in Paris this week gutted Notre Dame's roof as its 300-foot spire came crashing into the nave. A fire service spokesman said there was no immediate danger that the structure, which lost two-thirds of its roof in the fire, would collapse. But it was not yet considered secure enough for investigators to enter and start examining the source of the fire in situ, the prosecutor’s office said. Attention will also turn to the recovery and assessment of precious artwork within the cathedral. Large paintings inside the cathedral are believed to have sustained smoke damage, though are largely intact, according to The Guardian. The paintings are likely to be removed and transferred to the Louvre on Friday.

Stéphane Bern, the government’s culture representative, said on Wednesday that €880m had been raised for the restoration so far, with contributors including Apple, the Total energy group and tycoons who own luxury French brands such as L’Oréal, Chanel, Dior and Louis Vuitton. Many private individuals in France and around the world have also donated. 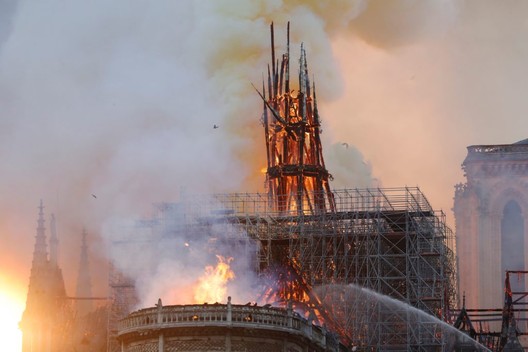