If you come to think of it, the urban development of the world's largest cities is like playing a game of Tetris; No matter how condensed or crowded, for architects, there is always room for more. However, this act of 'structural stacking' often creates unique architectural compositions.

As a follow-up to his first photo-series, Singaporean photographer and visual artist Kevin Siyuan put together 'Corridors of Diversity', a short montage of communal corridors and HDB (Housing and Development Board) block facades, featuring the dynamic designs and forms of Singapore's densely built environment.

Singapore’s first Housing and Development Board housing blocks were erected as response to a severe lack of adequate housing for the country's 3.4 million citizens. As of 2017, over 80% of the Singaporean population live in HDBs, which are known for their vibrantly-colored facades, focus on community social spaces, and the great ethnic and culturally-diverse residents.

Providing a take on the city's heterogeneity, photographer Kevin Siyuan, has created 'split' photo series on Singapore’s public housing. in hopes of capturing the wide diversity that characterizes the small island, he photographed the outdoor corridors running along the sides of the apartment blocks - which give a glimpse into the everyday lives of the individuals inhabiting HDB flats - and the urban features that surround HDBs, including different land uses, building density, infrastructure, greenery, and the meeting of traditional and contemporary functions. 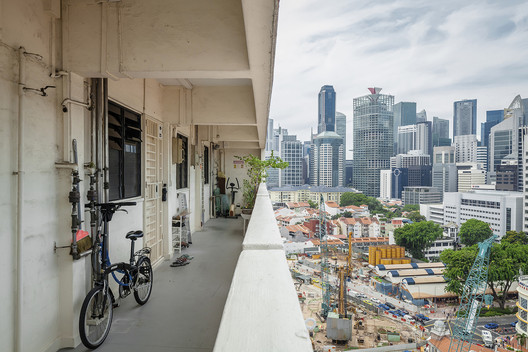