Save
"Corridors of Diversity": Showcasing the Secret of Singapore's Public Housing Success

Singapore’s first Housing and Development Board (HDB) housing blocks were erected in November of 1960, in response to a severe lack of adequate housing for the country's 1.6 million citizens. Fast forward to 2017, and over 80% of the Singaporean population live in HDBs, with over 90% of them owning the home they live in. Often painted in vibrant colors, HDBs have a focus on community social spaces, more often than not maintaining the ground floor of the apartment blocks as open public space, exclusively for public meeting areas. These can include hawker centers, benches, tables, grills and pavilions where residents can socialize under cover from the hot Singaporean sun. 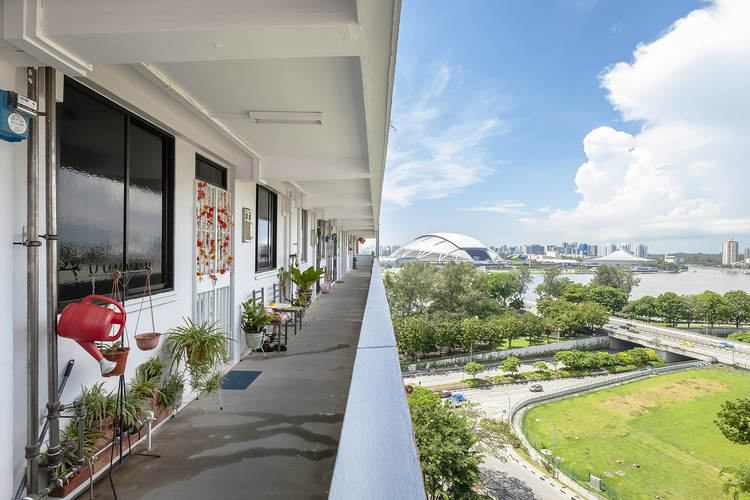 The first prefabricated HDBs were built in 1980, starting out with 3-4 room flats, then moving on to construct almost entire 50-storey buildings through prefabricated elements, increasing efficiency and decreasing the need for manual labor. As engineering technology began to take off, Singapore began to move into sustainable eco-HDBs, which included man-made waterways, energy, water and waste management, rooftop greenery providing passive cooling systems, and urban vertical gardens. Currently, there are plans for rainwater harvesting systems, an increased use of solar panels, and dual-parking systems for bicycles.[1]

Given the great ethnic and cultural diversity of Singapore, with four official languages (English, Malay, Mandarin and Tamil), the government saw the need for an Ethnic Integration Policy in relation to public housing. This has been in place since 1989, ensuring that HDBs represent a wide variety of individuals, and avoiding, among other things, the creation of ghettos. Providing a take on Singapore’s heterogeneity, Singaporean photographer Kevin Siyuan, has created a photo series on Singapore’s public housing icon.

Aiming to capture the wide diversity that characterizes the small island nation, Siyuan has photographed the outdoor corridors running along the sides of the apartment blocks. Each image focuses on a different aspect of diversity, highlighted in the images' individual titles. Each photograph has the same composition, split into two halves: on one side, in the macro scale, Siyuan showcases the variety of urban features that surround HDBs, including different land uses, building density, infrastructure, greenery, and the meeting of traditional and contemporary functions. On the other side each photo shows the “personal scale,” providing a glimpse into the everyday lives of the individuals inhabiting HDB flats, set against the backdrop of the ever-changing city. The public corridors also depict the relationship between communal and private life in the buildings, as the barrier between personal and collective space is blurred by unique objects in the public space, on display for anyone passing through.

As Kevin Siyuan puts it himself, “‘Corridors’ celebrates the diverse and colorful images of Singapore that altogether shapes its collective identity.”