The Tchoban Foundation - Museum for Architectural Drawing in Berlin shared with us this article about the exhibition Siza: Unseen and Unknown curated by architect António Choupina together with Dr. h. c. Kristin Feireiss. According to them, "this exhibition was conceived as a family show, not in the sense of an architectural dynasty but rather as a lyrical collection of drawings from the architect’s private surroundings". The selected drawings are from the Siza family’s own collection and include sketches from known and less well-known projects, as well as architectural fantasies.

Álvaro Siza was born in 1933, on the same year that the Bauhaus closed its doors. He is perhaps the last living modernist or, at the very least, the most significant voice to carry out the unfinished modernist project all the way into the 21st century.

Siza: Unseen and Unknown showcases this continuity through 100 sketches, as well as its unavoidable contradictions. These drawings are from his most personal archive, in addition to small collections of close friends and family. Hence, they focus not only on the professional legacy but also on the familial one, where Maria Antónia Siza (1940-1973) takes centre stage. His wife will draw him, he will draw her and the loving embrace of the human body will be transversal to architecture, art, life.

Quite fittingly, Juhani Pallasmaa told Álvaro Siza last year that “architecture is such an impure and complex thing, that speaking about it is like speaking about the theory of life…”. In many ways, the Bernini folds of Maria Antónia’s cloths and hair develop in Siza’s own ink lines and this anthropomorphic research goes on long after her death, at just thirty-two years old. Those bodies will grow increasingly more abstract, like the Venus de Milo, losing its arms and becoming something more – where the Hellenic sacred feminine is ever- present.

Those limbs multiply and turn back into architecture and geometry in the work of their son, Álvaro Leite Siza (1962). Father and son labour independently on related themes, themes of mythology and religion, intertwining figures that reveal the importance of family. The future is now in the hands of a grandson, Henrique Siza (1992) and his architectural studies in Berlin. Looming in the city are the silhouettes of the masters [image 10] that became the backdrop of Álvaro Siza’s first international proposals (1976-90), namely the Schlesisches Tor Residential Complex and the Kulturforum.

The “Bonjour Tristesse”, as it was nicknamed, revisits Berlinesque modernity through the curved corners of Poelzig's S. Adam Department Store or Mendelsohn's Mossehaus, while the Kulturforum, not far from the ashes of an ever-changing Potsdamer Platz, attempts to articulate the pieces of Scharoun and Mies like a glorious puzzle.

Nowadays, beyond the Internationale Bauausstellung (IBA), the Kulturforum has an empty core while Berlin is filled with glass buildings – Glas being the pen-name of Bruno Taut. Siza’s epitaph for Berlin is unexpectedly truer in the end: “The Taut City”.

Trapped by an unwanted title as ‘the architect of participation’ – after the Portuguese Carnation Revolution (1974) – Álvaro Siza will be invited to redevelop the Schilderswijk- West district (1983-93) in The Hague, and to design the new Faculty of Architecture (1984-96) in Porto.

The familial camaraderie of peers and collaborative interactions of students, combined with the white rendering of the Neues Bauen, are evocative of the Bauhausian carefree avant-garde. The School of Porto, as it is now known, proves that the last true modernist is also the ultimate mannerist, reconnecting the complexity of modern vocabularies with classical canons.

Continuity, contradiction and hybridisation play with his subconscious. The unknown Sports Complex for the 1997 Universiade in Palermo approaches the materiality of amphitheatres, coliseums and bullfighting arenas – a vastly underrated urban redevelopment, like many of Siza’s international interventions.

Another example would be his return to the Netherlands in 2002. Reclaiming the skyline of Rotterdam’s harbour, a city in constant expansion and reinvention, he suggests twin-towers yet only one was erected.

Starting that museum in the same year that he fractured his right arm, it is an unwavering testament to his philosophical cornerstone – hand drawings.

Over the course of several meetings, we became increasingly interested in a group of folders labelled as ‘Unidentified Projects’. We managed to identify some of them. Others are still just loose ideas, designs that never were but could have been. A few sneaked their way into the final selection, but this was never destined to be a monographic exhibition on Siza and his family – impossible due to the sheer scale of that enterprise and because its main character is still active, in continuous production. Nonetheless, a totalising methodology is sublimated in the works, a legacy which is perfectly summed up by Longfellow’s poem The Builders: ‘architects of Fate that work the walls of Time with great care, even the unseen parts, for the Gods see everywhere’.

Álvaro Siza was awarded the Pritzker Prize for his life's work in 1992 and is one of the most renowned contemporary architects. Amongst many accolades, he received the Golden Lion at the Venice Biennale of Architecture in 2002 and 2012. 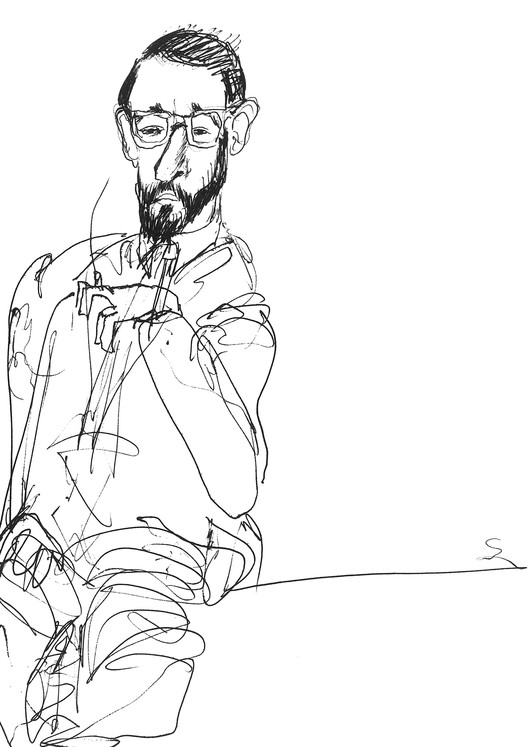