Save
The Notre-Dame Cathedral Fire: What Happened, and What Happens Next?
Share
Or
Copy 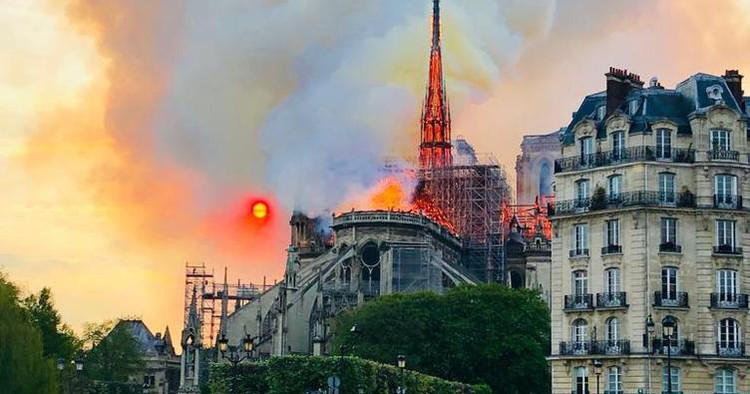 What Happened? (All Times Are Local to Paris)

6:43 PM: A second fire alarm is triggered, and fire is discovered in the roof’s timber framework. In the meantime, mass evacuations take place. The cause of the fire is yet to be determined, with investigators believing it was an accident. 50 French police officers will work on the case.

7:40 PM: The blaze spreads throughout the roof, engulfing the 93-meter-tall spire.

7:53 PM: The cathedral’s spire collapses, as French President Macron travels to the scene.

8:30 PM: The fire spreads to the church’s rectangular North tower, with fears that the South tower is also at risk. Firefighters move inside the cathedral. There are reports that the cathedral’s three medieval rose windows are destroyed, but this is later corrected.

11:00 PM: Paris Fire Chief Jean-Claude Gallet confirms that the cathedral structure, including the two bell towers, had been “saved and preserved,” but that 66% of the roof had been destroyed.

6:00 AM: Checks on the cathedral’s structure begin

With the fire extinguished, attention is now turning to the future of the Gothic landmark. French President Emmanual Macron has vowed to reconstruct the building, while two French business magnates, with portfolios including Gucci, Yves Saint Laurent, and Louis Vuitton, have pledged a total of $340 million. The Mayor of Paris, Anne Hidalgo, has pledged to lead fundraising efforts, while European Council President Donald Tusk has called on EU member states to consider financial backing. As the cathedral lies within a UNESCO World Heritage Site, the organization has also pledged support for the cathedral’s restoration. In total, $455 million has been dedicated to the project.

Attention will also turn to the recovery and assessment of precious artwork within the cathedral. Large paintings inside the cathedral are believed to have sustained smoke damage, though are largely intact, according to The Guardian. The paintings are likely to be removed and transferred to the Louvre on Friday. Among the artifacts confirmed to be safe are linen fabrics associated with St. Louis, and the crown of thorns. By a twist of good fortune, the $180 million restoration works underway meant that some of the cathedral’s artwork had been removed last week, including 16 copper statues.

One day after the fire, there are still many details yet to emerge. While the first photos show the interior of the building to be in better condition than expected, the condition of many artworks is still unknown. Flames threatened the cathedral’s three stained glass rose windows, and three organs, the conditions of which are also yet to be confirmed.

In the meantime, we are left to rue the devastation of another globally-renowned architectural landmark. Where the National Museum of Brazil fire led to the immense loss of South American history and the Glasgow School of Art fire led to the loss of an unrivaled example of Art Nouveau, the fire at Notre-Dame Cathedral strikes at the core of Parisian spirit. Plundered during the French Revolution, immortalized in Victor Hugo’s “Hunchback of Notre-Dame,” and triumphantly ringing its bells to inform the city of the end of the Second World War, the cathedral has stood alongside Paris through its greatest and darkest moments. Though devastating, yesterday’s 15-hour fire will not be the final chapter in this 856-year-old story.

This article used information sourced from The New York Times, BBC News, The Guardian, and Reuters

For almost a millennium, Notre-Dame Cathedral has stood proudly on Paris' central Île de la Cité, a symbol of the city's history, culture, and romanticism. On Monday, April 15th, 2019, thousands who lined the banks of the Seine and millions more across the world watched on in a mixture of disbelief, heartbreak, and helplessness as the Gothic masterpiece burned before their eyes. 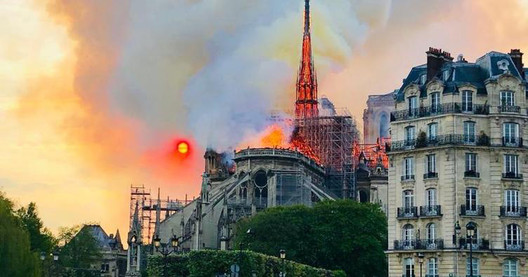