Brazilians and non-Brazilians alike took to the Twitter to express their grief and outrage. There were reports that fire hydrants were empty, causing firefighters to pump water from a nearby lake to quell the blaze. Many used it as an opportunity to slam the government, others to lament the choice of destination of funds to projects within the country.

Reporter at the scene of the Museu Nacional fire says firefighters are having trouble containing the blaze because there’s no water in the fire hydrants. https://t.co/O9nkxFmRAG

The Museu Nacional tragedy isn’t just about the institution’s funding and upkeep, but the city’s, too. There wasn’t water in the fire hydrants, so firefighters resorted to pumping water out of the nearby lake and calling in water tank trucks. https://t.co/83In6t1dOV

Fourty years ago, same negligence destroyed the iconic Museum of Modern Art in Rio, with most of its collection. pic.twitter.com/EM8hQEqD6A

A massive #fire has hit the 200-year-old Rio de Janeiro National Museum. There is no information yet on potential deaths, injuries, the cause of the fire or extent of the damage. pic.twitter.com/q6PMQJDbRX

The museum was founded in 1818 and recently celebrated its bicentennial in June.

News via CNN and The Rio Times 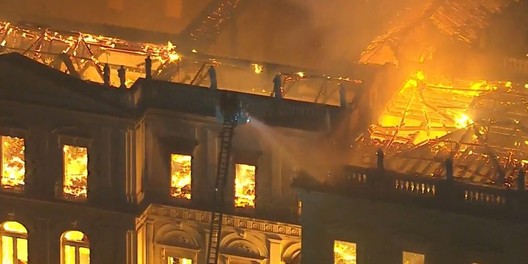