Save
The Glasgow School of Art Fire: What Happened, and What Happens Next?
Share
Or
Copy 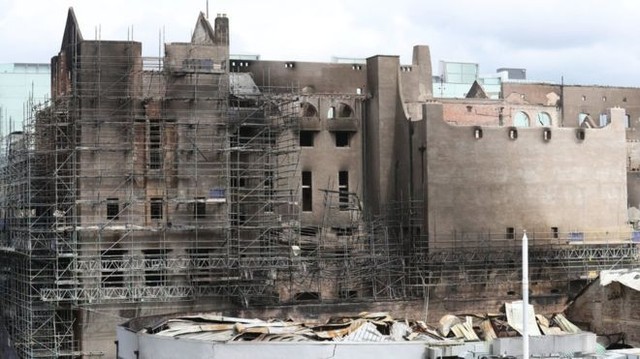 Designed by Charles Rennie Mackintosh and fully completed in 1909, the Grade A-listed Mackintosh Building is one of the Glasgow’s most cherished architectural works, and one of the finest examples of Art Nouveau in the world. Before the recent fire broke out, the building was undergoing an extensive £35 million restoration following a previous fire in May 2014, in which 90% of the building and 70% of its content were saved. The building was due to reopen sometime in 2019.

The restoration, which began in 2016, centered on the Mackintosh’s iconic library, using original wood species and historical documents. As part of the restoration, a fire suppression system was being installed which was reportedly weeks away from completion. In a cruel irony, large pumps needed for the water mist system had arrived at the construction site just one day before the fire.

The fire on June 15th occurred as students from the Glasgow School of Art were celebrating their graduation. In its aftermath, there was an outpouring of grief from both within and beyond the architectural community, with Scotland’s First Minister Nicola Sturgeon describing the incident as “heartbreaking.”

Concerns have been expressed by Glasgow City Council that the end walls of the building could collapse onto the street “without warning” with restrictions now in place on travel around the site. A fire investigation is now underway to establish the cause of the fire, with a larger public inquiry into the incident already ruled out the UK government’s Scottish Secretary.

Compared to the 2014 fire, the recent damage to the Mackintosh Building has been devastating. The celebrated library extension lies as a “tangled mess of charred timber and distorted steel joists” while the stone façade of the older eastern wing has been described as “baked, fractured, or visibly moved” by the intensity of the fire. Estimates at restoration have been put at £100 million, almost three times more than the projected cost of the 2014 restoration.

What does the future hold?

In the aftermath of the fire, a debate has ensued over the future of the Mackintosh, with some claiming the time may be right to demolish the building in place of a modern facility, while others claim that the building is simply too entwined with the history and culture of Glasgow, and must be restored.

Architect and Professor Alan Dunlop, who trained at the Glasgow School of Art, compared the aerial and drone footage of the site to a World War Two bombing and questioned the authenticity of a brick-by-brick restoration. He argued that Charles Rennie Mackintosh himself would favor a modern building taking its place, while Urban Realm Magazine editor John Glenday suggests that a new piece of architecture could be created within the original stone wall façade.

Others have argued in favor of restoration, such as Miles Glendinning, professor of architectural conservation at the University of Edinburgh, who points to numerous reconstruction projects of public buildings undertaken in postwar Germany. Such a project would not be without precedent in the United Kingdom, with major restoration carried out on the Royal Family’s Windsor Castle residence following a 1992 fire, at the cost of £36 million.

A final decision on the fate of the Mackintosh is likely to take some time, as are the full facts behind what caused the fire, and whether it could have been prevented. Until then, we are left to reflect on the role of the Glasgow School of Art and Charles Rennie Mackintosh in the advancement of architectural thought and design in the United Kingdom and beyond, and whether or not that extensive legacy can endure even after the Mackintosh Building is gone. 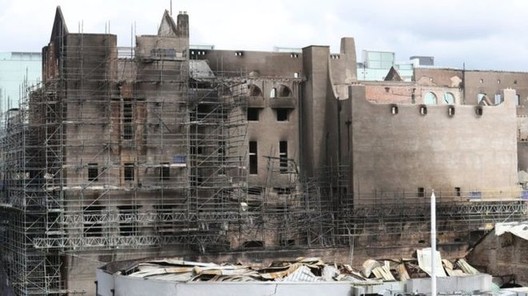