MAD Architects have revealed a new vision for New York City skyscrapers with a sinuous slender tower near the Empire State Building. Dubbed ‘East 34th’, the project was designed with a dark-colored glass facade that was made to fade into the atmosphere. Located adjacent to one of New York's most iconic structures, the project rethinks the city's rectilinear towers and sharp edges to create a new form for the Manhattan high-rise. 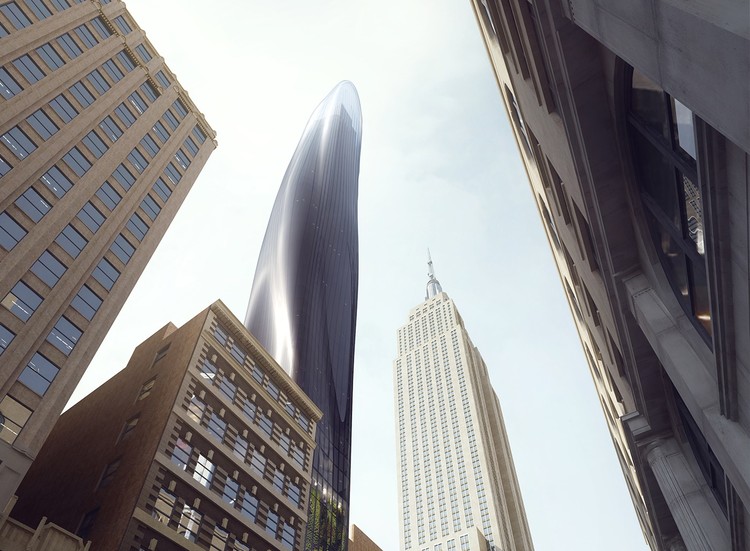 The skyscrapers of New York City are known around the world, and the famous skyline is a result of economic growth. As MAD states, the East 34th tower was made to "sprout" within the grid, rising with a soft, undulating surface that suggests a more organic, living architecture. The design was made to oppose the traditional towers that demonstrate the cultural impact of power and capital in cities. The team goes on, stating that by "defying the stacked floor plates and authority of a bygone industrial era, East 34th softens the hard skyline and introduces a dialogue between New York’s modernist landscape and nature."

The sinuous skyscraper rises from a commercial podium at street level that combines retail and public amenities. Inside, a large, multi-floor atrium features an expansive green wall in contrast to the concrete jungle of the city. The interior is interspersed by double-height communal spaces and amenities, creating opportunities for residents to connect with one another, and experience a new type of ‘urban nature’ within the vertically dense city. A model of East 34th is currently on show in ‘MAD X’ – a year-long exhibition at the Centre Pompidou in Paris.