Bjarke Ingels Group has released details of their proposed landscape urbanism project in Brooklyn, New York, transforming a six-lane highway into a connected realm between the city and waterfront. The scheme centers on the Robert Moses-designed Brooklyn Queens Expressway, dating back to the 1960s.

As officials prepare to carry out needed repairs on the highway, existing proposals fail to address the barrier created by the infrastructure, dividing the city and waterfront. BIG’s scheme, therefore, outlines how the Expressway could be turned into parkland, accommodating vehicular traffic without compromising on the quality of public space.

The first step in the BIG scheme is to construct an at-grade roadway along Furman Street and Brooklyn Bridge Park covered with a simple deck structure. The deck provides a platform for adding significant new parkland along the underused corridor while connecting the Brooklyn Heights and Brooklyn Bridge Park with a series of crisscrossing rampways, greenery, and park amenities.

Local park access is accommodated on a meandering parkway, while space is created for a potential spur of the nearby light-rail line. The deck also extends south to Atlantic Avenue, creating a new crossing and urban nexus that serves as an introduction to the linear park.

The simple structural approach, therefore, creates a feasible, less-costly solution for the reconstruction of the vehicular artery while also serving as an act of landscaped repair. Though radical on its surface, the BIG scheme is reminiscent of Brooklyn Height’s historical conditions, where the river and city were seamlessly integrated prior to the highway’s construction. 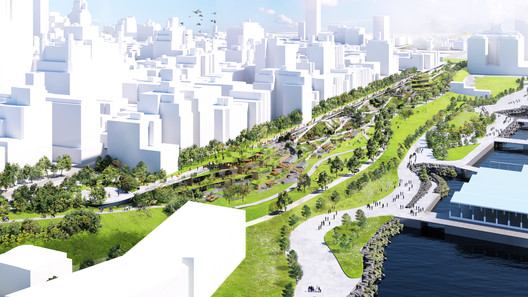