Studio Gang has unveiled a design for the University of Chicago Center in Paris. The Center in Paris Project seeks to “create a new hub for scholarship and cultural exchange in Paris’ rapidly-developing 13th arrondissement” with an academic center and a mixed-use residential building.

The scheme is adorned with biodiverse green spaces and an architecture that physically and intellectually weaves the block into the existing urban fabric. To support a lively dialogue between the University and local communities, shared spaces have been carefully arranged to connect to the outdoors and encourage communication.

The academic center is organized vertically, with classrooms wrapping around a central, daylit interior, culminating in a biodiverse roof garden. The building’s central staircase serves as a vertical campus quadrangle, connecting spaces physically and visually. Meanwhile, the stone façade of the building selectively opens and closes, revealing public activities while secluding private study and research areas.

The central courtyard, rooftop gardens, and shared terraces cultivate social connection and biodiversity, while providing spaces for socializing, study, rest, and a habitat for urban wildlife. In contrast to the vertical emphasis of the academic center, the residential building’s wrap-around balconies extend the living spaces into the city and offer a horizontal, fine-grained texture.

The winning entry in a competition for the scheme's design, Studio Gang's proposal will be on display at the Pavillion de l'Arsenal in Paris through May 9th, 2019.

News of the scheme follows shortly after Studio Gang’s proposal for Chicago O’Hare’s Global Terminal was one of five selected to go to a public vote. Meanwhile, the firm has collaborated with SCAPE to reveal plans for Tom Lee Park in Memphis. 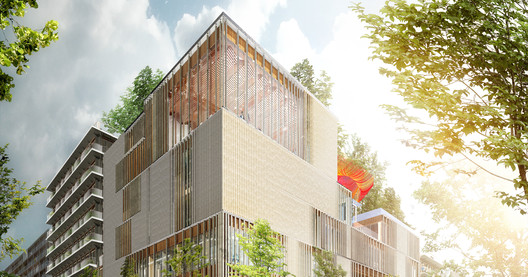