Save
Who is Arata Isozaki? 20 Things to Know About the 2019 Pritzker Laureate
Share
Or
Copy

The prolific and varied career of 2019 Pritzker Laureate Arata Isozaki, which includes more than 100 works built on virtually every continent, gives us a huge amount of facts that are relevant to understanding his life and architecture. Considered the first Japanese architect to develop his work on a truly global scale, Isozaki took special care to respond to the context and the specific requirements of each project, expanding the heterogeneity of his work and resulting in a variety of styles from vernacular to high tech.

See below 20 fascinating facts that illuminate his particular genius:

1. The Second World War had an important influence on his early vision of architecture. At the age of 12, Hiroshima and Nagasaki were bombarded, fostering in him the idea of the temporality of architecture and the importance of 'pleasing' its users while they move through and experience it in their own time. [1]

2. His career began under the teachings of the 1987 Pritzker Prize, Laureate Kenzo Tange. [1] After university, Isozaki continued an apprenticeship with Tange for nine years before establishing his own firm in 1963, Arata Isozaki & Associates. [6]

3. Isozaki was a pioneer among Japanese architects when working on projects outside of his native country, designing for example the Museum of Contemporary Art in Los Angeles (1986) and the Team Disney Building in Florida (1991). [9]

4. Isozaki has built more than 100 architectural projects in 6 decades, including important public and cultural buildings in Japan, Spain, USA, China, Italy, Qatar, among many others around the world. [1]

5. He was a proponent and pioneer of architectural representation through the medium of silkscreen and thermal prints. [3]

6. Isozaki included in his work the concept of 'Ma', which defines the intermediate spaces between the objects: "In-between space, sound and sound, there are silences apart, pauses. That's called Ma. Space is important; in-between space is more important", he says. [5]

7. His work also integrated urbanism, developing in 1962 the futuristic project 'City in the Air' for the Shinjuku neighborhood in Tokyo, Japan. The project integrates "elevated layers of buildings, residences and transportation suspended above the aging city below, in response to the rapid rate of urbanization". [1]

8. Isozaki's work was always interdisciplinary: in addition to urban design, he worked on the design of fashions, graphics, furniture and set design, as well as writer, critic, jury of architectural competitions, and collaborator with artists. [6]

9. He also designed the Osaka Demonstration Robot for 1970 Osaka Expo, used for transportation. It was housed under Kenzo Tange's Festival Plaza space frame. [4]

10. During the 70s and 80s, Isozaki worked recurrently with his third wife, the Japanese sculptor Aiko Miyawaki (1929-2014), who somehow soaked his works of innovative geometric shapes. [6]

12. Due to its impact and global influence, in 1985, Tadao Ando, 1995 Pritzker Prize Laureate, called Isozaki "the Emperor of Japanese Architecture". [8]

13. Also in 1985, Isozaki also developed the redesign of interiors of the famous Discotheque Palladium, in New York, as a 'building inside a building'. The nightclub, formerly a ruined theater, became the site of incredible celebrity parties, including Madonna. It was demolished in 1998. [8]

14. Among many other important awards, he won the RIBA Gold Medal for Architecture in 1986 (United Kingdom) and the Gold Lion of the Venice Architectural Biennale, as commissioner of Japanese Pavilion, in 1996 (Italy). [1]

15. Throughout his career, Isozaki frequently resorted to the typology of "Groundscaper", since according to him, the fact of 'lying down' a skyscraper dissipates its 'intimidating power', becoming more 'serene and humble'. [6]

16. He was very interested in Latin American revolutions of the twentieth century, especially that of Cuba and the figure of Che Guevara. Isozaki even used to wear a beret with a star. [2]

17. Isozaki thinks that in the southern hemisphere all are minorities. That’s why he greatly values the architecture linked to the culture to which it belongs, demonstrating his doubts regarding the effectiveness of globalization. [2]

18. In 2011, together with the artist Anish Kapoor, Isozaki developed the inflatable structure Ark Nova, to host Lucerne festival. [10]

19. His artistic influences are very varied, from the Renaissance and classical architecture of Borromini and Schinkel, to the Constantin Brâncuşi’s Infinite Column and the sculptural work of Isamu Noguchi, including the Louis I. Kahn’s use of the cannon vault. [6] 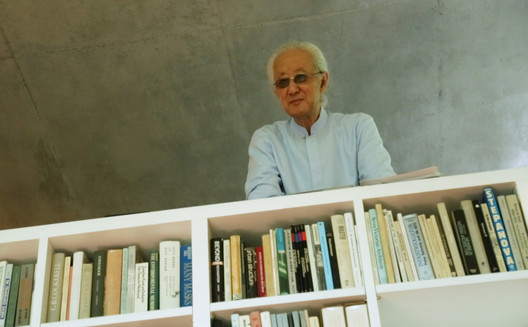