Save
Coolest White: A Painting to Reduce the Urban Heat Islands
Share
Or
Copy

The increasing use of air conditioning is causing many cities to hit record energy consumption levels during brutally hot summer months. In populous countries like India, China, Indonesia, Brazil, and Mexico, large urban centers function like ovens: buildings absorb heat that is re-released back into the environment, further increasing the local temperature. More heat outside means more air conditioning inside, which not only raises energy consumption, but also increases the levels of carbon dioxide in the atmosphere.

With this vicious cycle in mind, a paint was created to protect buildings and urban structures from excessive solar radiation, diminishing the effect of the urban heat island. The innovation came from the partnership of UNStudio, a Dutch architectural firm, and Monopol Color, a Swiss paint specialist. The dark-colored materials that are used to construct the buildings in our cities are one of the main causes of heat accumulation in urban areas. While darker materials absorb up to 95% of the sun’s rays and release them straight back into the atmosphere, this value can be reduced to 25% with a normal white surface. Now, with ‘The Coolest White’, it is possible to reduce absorption and emission to 12%.

“Heat from buildings is released into the environment, while at the same time the necessary cooling of the building increases energy consumption. In view of global warming, this is a vicious cycle we have to break out of as a matter of urgency. When you think that, after only the next 30 years, 68% of the world’s population will be living in towns and cities, it is certainly not wrong to tackle this issue very specifically in the urban environment”, says Lionel Schlessinger, Owner and Managing Director of Monopol Colors.

The creators also took into account the increasing storms, winds, solar radiation and dust that our cities face today. 'Coolest White' paint is based on fluoropolymer technology and has ultra durable properties, such as improved abrasion resistance up to 75%, weather resistance and excellent color, as well as gloss retention, which increases the coating life in up to 30 years. The multilayer coating system is designed for high quality metal facade elements and aluminum, steel or fiberglass structures, such as those used mainly for industrial and commercial buildings, shopping centers, hospitals, factories, bridges or residential buildings.

"It's undeniable that our cities are getting warmer, so we have to wonder how we can stop this trend. On the one hand, "The Coolest White" makes buildings more resilient and, on the other hand, can drastically reduce the urban heat load," says Ben van Berkel, founder and principal architect of UNStudio. 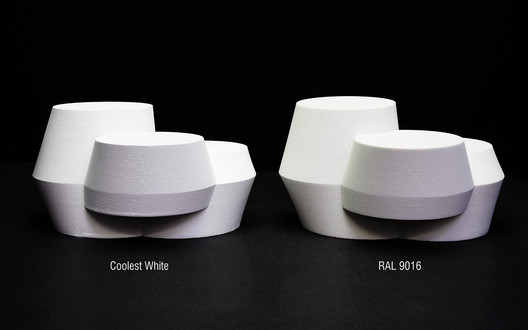