Save
“I Don’t Have Any Competitors Because My Projects Are Unique”: In Conversation with Hua Zhang
Share
Or
Copy

The following excerpt from my recent interview with Tianjin-based architect Zhang Hua continues an ongoing series of interviews that I’ve been conducting during my frequent trips to China. Zhang Hua is leading his design studio, Zhanghua Architects, which is a part of Tianjin University Research Institute. Professor Zhang Hua’s work follows his uncompromising form-generating theory, which is based on the desire to capture the progression of transformational processes. In his many built projects, the architect examines and expresses such formal transformations as turning from something basic to complex or from monolith to disperse. The focus is on the state of transformation itself, how a form is changing and morphing from one state to another. We spoke with Zhang Hua through an interpreter at the institute, with half a dozen young architects and researchers from his studio, seated all around and taking notes. 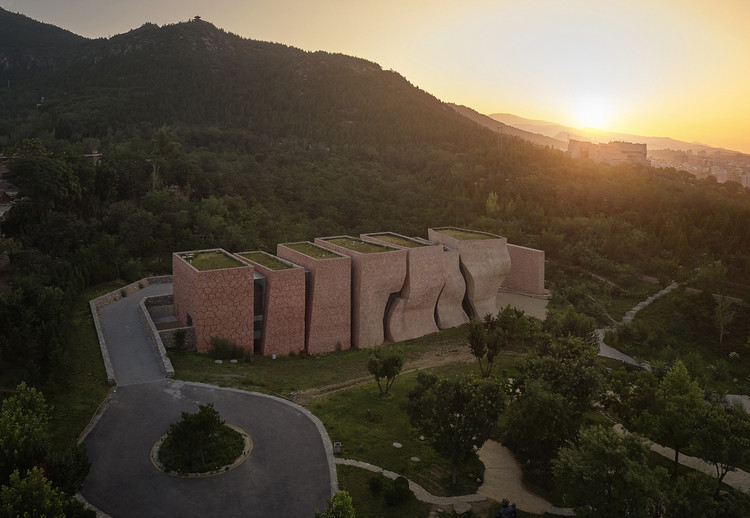 Vladimir Belogolovsky: We met the other day here at Tianjin University. I was immediately intrigued by some images of your work, which I find quite powerful. You said your work is different from everyone else’s. You said it is unique. Could you tell me how so?

Zhang Hua: It is not the outcome that’s original, but the process. I concentrate on the process.

VB: How important is it for you to be original?

ZH: I have a theoretical frame, but I am not concerned with achieving any particular look. I am open to many outcomes. I don’t want my style to be fixed. My focus is on transformative processes, on how one thing transforms into another. I am interested in the transition from one state to another – from solid to void, from opaque to transparent, from flat to volumetric, or from static to dynamic. I am interested in the transformation itself to reflect physical changes, geometric changes, conceptual changes, and so on.

VB: You made a powerful statement, “Architecture needs theory.” Tell me more.

ZH: The foundation of my theory is topology. My theory is based on mathematics and fractal geometry. I am interested in natural growth and self-similar, iterated, and detailed mathematical constructs and algorithms. I also find inspiration in Chinese landscapes, mountains, geology, stone formations, tree growth, non-Euclidian geometry, water patterns, and so on.

VB: What do you think about the work of Wang Shu? You told me that he represents the past, while you represent the future.

ZH: My work is based on modern science, quantum physics, chaos theory, complex geometry, and so on. Wang Shu’s ideas are based on traditional architecture and geometry.

VB: Could you talk about your studio and how it fits into the larger structure of the Tianjin University Research Institute? Do you have any competitors here or do you only compete with outside designers?

ZH: Our Institute has about 800 people, of which about 600 are designers – architects and engineers. I work with total freedom here, with a small staff of about a dozen young architects. And, as I already told you, I don’t have any competitors because my projects are unique. [Laughs.]

VB: You teach at the university. How do you teach architecture?

ZH: We work on the same or similar projects that I have in my studio. My students base their theses and research on my theory of architecture. We work in one direction.

VB: You have realized several major cultural centers. Which one are you most proud of?

ZH: That would be the Yu Qingcheng Gallery in Tianjin, a museum of terracotta sculptures by the famous sculptor Yu Qingcheng. It is the most uncompromising of my projects based on fractal geometry. This project illustrates the process of transformation from stationary to super active, as far as a form – from the most basic to very complex. It is like a journey; the destination is open-ended. Typically, I start with a sketch and then my team interprets it with the help of computers. And, at some point, the computer takes the lead.

VB: In a way, you are giving up control or your authorship, right?

ZH: It is a collaborative process and I give it a particular direction.

VB: How does the transformation you describe that takes place in your museum’s exterior form affect the function within?

ZH: It does or does not, to some extent. There is a cultural relationship between the form and function. It is a sculpture museum; the form is simply an embodiment of the exhibits within. The form is independent of the actual function, but not its cultural function. That’s the whole point. Originally, I envisioned my interiors differently. But they were not realized the way I wanted.

VB: Have you ever realized a project that you were completely satisfied with?

VB: Could you talk more about your inspirations? You mentioned fractal geometry, nature, geology. What else?

ZH: Let me show you one of my sketches from a long time ago [opens one of several large portfolios of sketches]. As you can see, this is just a sketch. I was just drawing.

VB: Unrelated to any particular project.

VB: And then what happened? Did this lead to a project?

ZH: Nothing happened. [Laughs.] It was just a drawing, an idea. Maybe one day it will be realized.

VB: This drawing was something you did subconsciously.

VB: Earlier we talked about many different influences on your work – mathematics, fractals, Mobius Strip, and so on. What other influences could you mention? Do you get any inspiration from other architects’ work?

VB: What was your reaction when you first saw his work?

ZH: I cried. [Laughs.] I have been studying his work for many years, but I only had a chance to see it in person last year for the first time.

VB: What made you cry?

ZH: I have no idea. I had Nirvana-like feelings...

VB: Another one of your projects, Geological Museum near Tianjin appears to be merging with the surrounding mountains. Could you talk about its main concept?

ZH: The building is built out of stone, in layers like geological stratum. The stones were reclaimed from the abandoned houses in nearby villages in the mountains. So, it is a very sustainable project. I have a particular interest in stone and minerals, and I have an extensive collection, which is one of the references and inspirations for my work. Merging architecture with its surrounding is one of my primary themes.

VB: Are you concerned with what Chinese architecture is, and do you try to express it in any way in your work?

ZH: Not at all. I have my own ways of expressing my ideas. I don’t feel restrained in any way. I would even say that I feel lonely in my thinking.

VB: This is a very interesting thought because when I talk to leading international architects I hear this quite often – you architects are, in fact, very lonely because you try so hard to find your own way, and when you succeed, you become isolated. Too many choices lead to isolation. That’s why the theme Common Ground became so central in the profession a few years ago, and now younger architects are giving up their claims to authorship, preferring to focus on teamwork and problem-solving.

VB: Do you have a dream project?

ZH: Just a dream. I wish I would get the Pritzker Prize! [Laughs.]