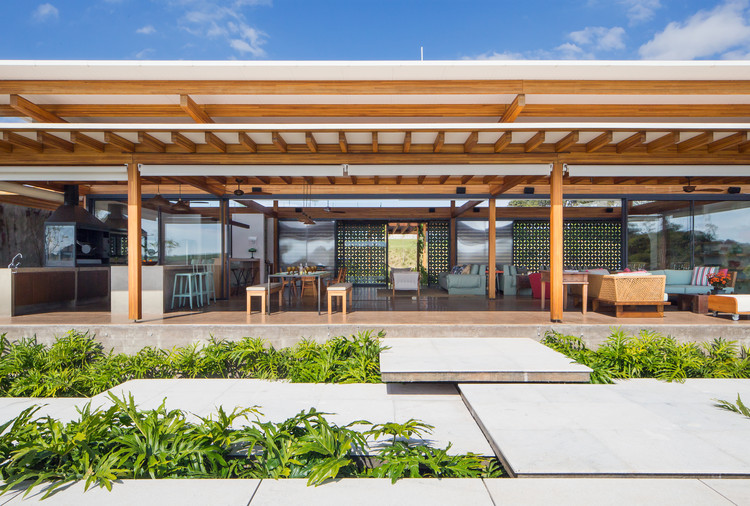 Text description provided by the architects. Because of the large size of the land, the project was thought since the beginning as a single-story house, composed of volumes separated by small gardens, and connected through a covered circulation. The house can be understood as a juxtaposition of constructive materials, where each element is presented in its particular quality and can be clearly understood in its specific function. The project follows a logic of assembly, and this is clear in the constructed work.

The house is divided into seven volumes separated by recesses of the garden. The largest block is the living room, which houses living room, kitchen, and balcony with barbecue. This block is connected to three volumes, with two suites each, by a large corridor of almost fifty meters. A wall of hollow elements accompanies the entire length of the circulation, protecting it from rain and allowing cross ventilation in all environments connected by the corridor. From the living room balcony, you can access the pool area by walking through the garden on raised decks lined with white granite. Under the pool, solarium was built a sauna, which opens out to the view of the dam.

On the opposite side of the dam, separated from the rest of the blocks, there is a volume that houses a games room and television, and a block of services, with kitchen, service area and service dependence. The whole plant was developed in a modulation of 7x3,5m. The project came from the crossing of two perpendicular axes: an axis of circulation that connects the volumes of the rooms, the integrated living room with kitchen and television room and games, with a service shaft, which goes to the closed porch of the entrance, which forms a line Straight between the garage and the barbecue on the balcony.

The house has two main facades, with opposite features. The back wall, which encloses the longitudinal circulation, is marked by a large wall of green ceramic elements that accompany the entire length of the building. The opposite facade, facing the Jurumirim dam, is all enclosed with aluminum frames and clear glass. In the rooms were also installed PVC panels, which protects the indoor environments from the sun and insect incidence, but allows ventilation.

Whenever possible, we seek to combine constructive rationality and aesthetic expression. Few coatings were used, we sought to work with the materials in order to reveal their particular characteristics. The structure of wood is always apparent. The white thermal acoustic tiles cover can be seen from inside the house. With the exception of wet areas, the entire floor of the house is the concrete slab itself, which after polishing resembles granite but at a lower cost, as it is not necessary to make a subfloor and to coat it with another material. The feeling in the interior spaces comes from the combination of these few constructive elements and the chosen furniture, which is simple and comfortable.

The sloping roof built above the living area reaches the height of 4.3m from the balcony floor, which would make this area exposed to rain and sun. So that the porch could be fully utilized, a second cover, 2.7m high, was erected below the first. This second cover is detached from the house as a measure to preserve the entrance of light and the view of the sky from the room. 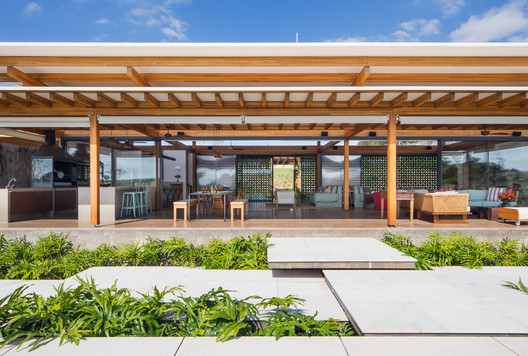