The largest pier building in the world when completed in 1901, the Commonwealth Pier will be reactivated with the introduction of new materials, increased daylight, and new points of connectivity. The exercise in adaptive reuse will contain flexible office space, dynamic event space, new retail, dining, and public amenities.

Central to the SHL scheme is the iconic Headhouse structure, is the preservation of rich historic architecture. Stone arches and cornices of the Headhouse will remain intact, while columns and column connections will be exposed. A northern extension will see the addition of curtain walls and other lightweight materials to allow the building to integrate seamlessly into its neighborhood context.

Throughout the development, 15,200 square meters of enhanced outdoor space will include courtyards, walkways, green spaces, and a grand plaza. To the southwest, a 2,300-square-meter waterfront plaza will become a central node for the pier, accommodating year-round events with dotted tree planting, custom seating, and moveable fixtures.

Meanwhile, a paved pedestrian path will run the entire perimeter of the project, with views of downtown, East Boston, and Boston Harbor. Throughout the path, niches cut into the building’s façade will create unique public seating areas, with shelter, signage, and connectivity to retail and dining.

The Seaport World Trade Center has a rich history and the ambition to become a central component of the rapidly developing Seaport District. This project is about more than redesigning a building. It becomes a masterplanning task as thousands of people will utilize the building and its surrounding plazas, courtyards, and walkways each day.
-Kristian Ahlmark, Partner and Design Director, Schmidt Hammer Lassen

The scheme was developed in collaboration with developer Pembroke Real Estate LLC, executive architect CBT Architects, and landscaping by Sasaki. Construction is expected to begin in 2020.

As SHL's second U.S. project, the Seaport World Trade Center follows on from the firm's Monroe Blocks scheme in Detroit. 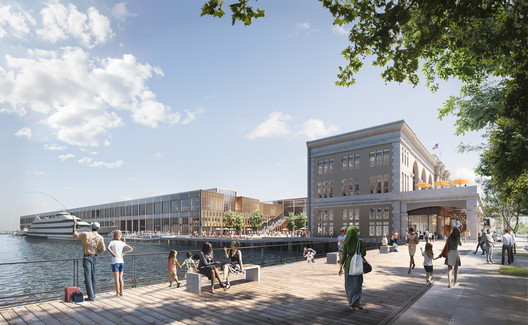