Save
In New York City, When Form Follows Finance the Sky's The Limit
Share
Or
Copy

These high-profile developments, each jostling to outdo the next, cast long shadows over the rest of New York. In recent years a veritable flood of projects have gained admission to what is now called ‘Billionaires’ Row,’ including Raphael Viñoly’s 432 Park Avenue, Christian de Portzamparc’s One 57, Robert AM Stern’s 220 Central Park South, and SHoP’s 111 West 57th Street, with Central Park Tower, 262 Fifth Avenue, with many more on the way. These architectural supermodels are not the product of technological advances, but economic ones.

After the stock market crashed in 2008, investors stashed their cash in the tangible safety of luxury housing. Now, full-floor apartments overlooking Central Park are a must-have accessory for the elite. With plenty of affluent customers, the sky’s the limit.

Or, to be more accurate, the sky has no limits. Revamped air rights laws, or transferable development rights (TDRs), permit landowners to purchase their neighbor’s surplus air space. On top of this, developers can continue upward in exchange for financially backing affordable housing elsewhere. Assembling these complex, backdoor property deals are real estate’s latest game of strategy.

Fighting for more thoughtful, transparent dealings are community advocacy groups such as the Municipal Art Society of New York (MAS). Since public review processes are not currently required, New Yorkers find out what their skyline and streetscape will look like along with the rest of us. The lack of discretionary review is what makes New York so great, developers argue. Anything is possible.

For better or worse, developers are far from alone in their defense of skyscrapers. In a 2016 article in Curbed, Adrian Smith of AS + GG (architects of the Burj Khalifa), asserted supertalls are a symbol of the city's future success; building up is the natural and positive opposite of urban sprawl. Building up is building well.

This back and forth discussion is not a new one. Wainwright reminds us the original skyscraper was contentious in its day. However, if this was about authentic, contextual design, simple steps could be taken to give New Yorkers a voice. Instead, these bean poles are an overcompensating exercise of finance and economy. Balkrishna Doshi, the most recent laureate of the Pritzker Prize winner, said “As architects, we are supposed to be social, economic and cultural designers. But really we are exclusive when we need to be inclusive.” Supertalls seem to be the true architectural definition of social exclusion.

Read Oliver Wainwright's detailed and essential feature on supertalls in The Guardian here. 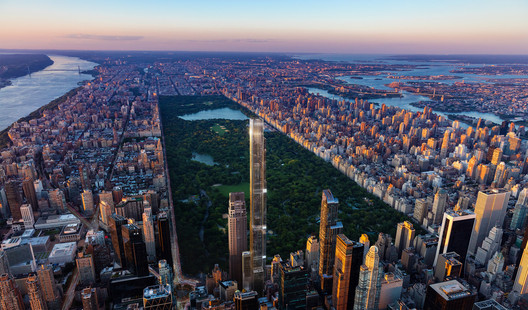