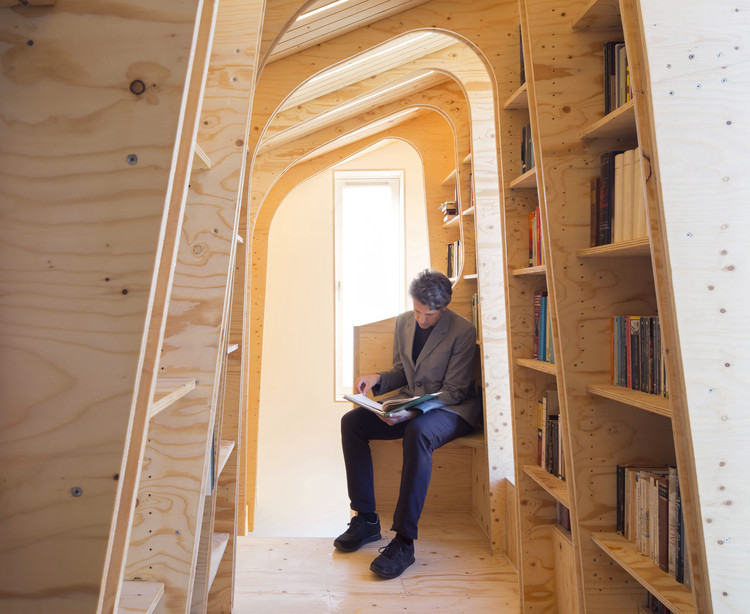 Text description provided by the architects. Loft Library is an ingenious conversion of a trussed rafter roof through the insertion of plywood arches to form integrated structure and shelving for a large collection of books.

Loft Library responds to the client’s brief to provide 40 linear meters of book storage for a two-storey end of terrace house in Walthamstow, East London. The construction of the house built in the 1980’s was brick cavity walls with a trussed rafter roof. The single pitch of the roof formed a space at one end of the loft which was not easy to access due to the proliferation of diagonal members in the timber trusses. As the client’s budget was limited it was decided to work within the fabric of the existing building rather than create a new loft structure or extension. By replacing the diagonal truss members with plywood arches the Loft Library was formed with a stair access, small bench, shelves between arches and a study space at the end.

The material used for all surfaces was 18mm spruce plywood. For the curved arches detailed measurements were taken of the existing loft space by the architects, templates drawn in CAD and plywood elements cut precisely to size and shape by the CNC cutting service Cut & Construct. The plywood elements were provided to the main contractor as a “client supply” item and had screw-holes and item numbers cut into the material to ensure quick and easy assembly. Three vertical triple glazed windows were installed on the north elevation between the trussed rafters to provide light and rhythm to the library and study space. An additional window on the west elevation was installed to catch the warm evening sun.

The Loft Library has created 10sqm of new floor space through the innovative adaptation and restructuring of the loft space. Working with the engineers Corbett & Tasker an expressive structural solution was developed to replace the diagonal timber members with an enfilade of structural plywood arches. The roof structure was left in place throughout the works thus saving on the additional expense of rain-proofing the construction site. Quotations for the supply, cutting and delivery of the plywood arches, staircase, shelves, bench and desk were sought prior to tender so that the risk of an apparently complex architectural proposal wouldn’t overpriced by tendering contractors.

Spruce plywood was chosen over birch plywood as it was both cheaper and has a more expressive timber grain. The fire retardant treatment of the timber surfaces was a non-hazardous, non-toxic, low viscosity clear water based product called Flametect C-WD. This was over-coated with OSMO Polyx Oil. LED lighting strips of 300lumen/metre were installed in the centre of each bay to illuminate the books and integrate with the rhythm of the arches. 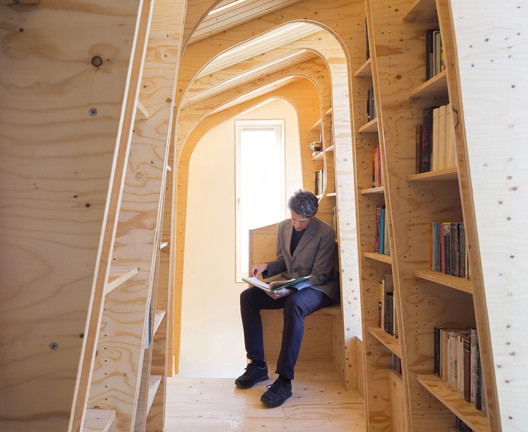