El Equipo de Mazzanti, led by Giancarlo Mazzanti, has developed a line of toys inspired by their playful Bosque de la Esperanza sports center on the outskirts of Bogotá, Colombia. The first edition of the “We Play You Play” toy series inspired by the firm’s most recognizable architectural and social projects, the Bosque de la Esperanza toy set embodies Mazzanti’s ethos of “using the playful as a design tool.”

With more than 15 years of experience in architectural design, the Mazzanti team developed a special interest in using play as a method of involving and encouraging social behavior within the communities impacted by their designs. The Bosque de la Esperanza set therefore contains 16 modular pieces and 30 connectors, with complex geometries igniting a cognitive element, and creative challenge. 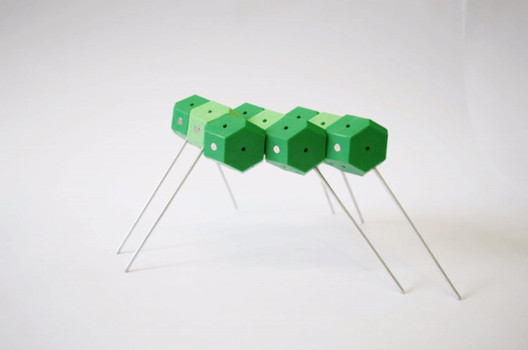 Located on the outskirts of the Colombian capital, the Bosque de la Esperanza consists of a 700-square-meter canopy that can grow and change depending on future needs. The canopy, covering an open-air plaza and sports center, is comprised of modular, prefabricated dodecahedrons (comprised of 12 sides), reading as a cluster of trees against the dense urban settlement and “a symbol of union, nature, and hope.”

The associated construction game includes 16 modules made of 100% recyclable polypropylene and magnets on all side, as well as 20 polypropylene connectors, 10 metal connectors, two cotton bags for storage, and a multilingual brochure.

The Mazzanti Team uses the playful as a design tool. The game, as well as architecture, redefines relationships, roles, and situations in defined contexts. We believe that the value of architecture lies not only in it but in what it produces. We are interested in producing actions, changes, and relationships; This will allow us to develop open forms, patterns or organizations that act in the construction of social actions.
-Equipo de Mazzanti

The series is set to be presented for the first time at the Spielwarenmesse 2019 toy fair in Nuremberg, Germany.

Last year, Equipo de Mazzanti was a winner of ArchDaily’s Building of the Year Awards 2018 for their Santa Fe de Bogotá Foundation in the healthcare category.